The man was caught on a surveillance camera.

Customers of a Maine grocery store got a scare when they discovered razor blades had been stuffed in raw pizza dough they’d recently purchased.

The supermarket contacted the police and an investigation was initiated.

After examining surveillance footage, it was discovered that a man had tampered with several Portland Pie brand products.

After police put out an appeal to the public, a suspect was identified and arrested.

Nicholas Mitchell, the alleged tamperer, was a former employee of It’ll Be Pizza, the Maine-based manufacturer of the product.

Customers who purchased the products between Aug. 1 and Oct. 11 are encouraged to return them for a full refund.

It’ll Be Pizza’s CEO Mike White confirmed in a statement that Mitchell was a former employee but did not wish to provide further detail due to the ongoing investigation. 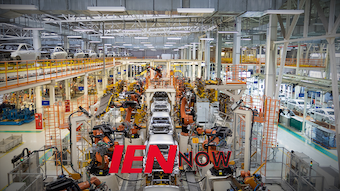 The governor lifted mask mandates, but not all factories are on board.
Mar 4th, 2021

They don't have a prototype yet, but they want to start production next year.
Feb 25th, 2021
Follow Us
Most Recent