And it’s a doozy.

When Fiat Chrysler first announced its plan to merge with French automaker PSA Group, there were some things we could easily predict like economies of scale and shared technology platforms.

Here’s one thing we couldn’t predict: a name change. And it’s a doozy.

FCA and PSA Group have just announced that the name for their 50-50 merger will be STELLANTIS. That’s right, what’s now the fourth largest auto company in the world sounds like it’s named after your cholesterol medication.

But that’s not really the origin. The combining companies said in a press release that “STELLANTIS is rooted in the Latin verb ‘stello’ meaning ‘to brighten with stars.’ The intent, say the companies, is to underscore “the spirit of optimism, energy and renewal driving this industry-changing merger.”

The companies have said that their next step will be unveiling a new logo, but rest assured Jeep aficionados: all of the group’s existing vehicle brands will remain intact and STALLANTIS is only applied to the corporate name of the merged parent companies. 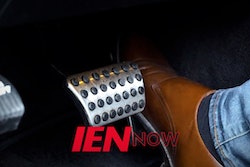