In addition to flying metal and debris, reports detail the machines throwing themselves against walls and ripping out electrical outlets.

No, these comments don’t originate from an industrial explosion, transportation crash or war zone.

They come from the complaints of individuals around the country who were using a top-loading washing machine … from Samsung.

Yes, that Samsung. The same company recalling a million of its Galaxy Note 7 smartphones over concerns of an exploding battery.

So far there have been 21 reported incidents of washing machines exploding around the U.S. As many as 11 models seem to share a potential defect, and all of the machines in question have been manufactured within the last five years.

In addition to hardware, metal pieces and water being flung at potentially hazardous speeds, reports detail the machines throwing itself against walls, lunging up to two feet forward, ripping out electrical outlets, lids being completely blown off, and the sides of the machines being bellowed outward.

To the surprise of no one, Samsung is being sued by three former owners of these washing machines turned fragmentation grenades.

The suit appears to place blame on a support rod within the top-loading mechanism that loosens during the spin cycle, unfastening the washing tub and sending debris and water flying. The lawsuit also alleges that Samsung has known of this potential issue for years and did little to warn consumers.

The U.S. Product Safety Commission has issued a warning covering machines made between March 2011 and April 2016.

For now, Samsung isn’t saying much. However, per their website, the company states that it is in active discussions with the CPSC.

Samsung also states that in rare cases affected units may experience abnormal vibrations that could pose a risk of injury or damage when washing bedding, bulky or water-resistant items. It recommends the use of the lower speed delicate cycle when washing these items, as no reported incidents have occurred when using this setting.

The company also points out that customers have completed hundreds of millions of loads without incident since 2011.

To determine if you have an affected washing machine, the company has set up a serial number search at www.samsung.com/us/support/tlw. 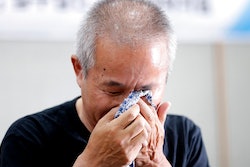