Mark Parker said a recent scandal involving doping experiments at a Nike-funded training facility had "absolutely nothing" with him leaving the top job. 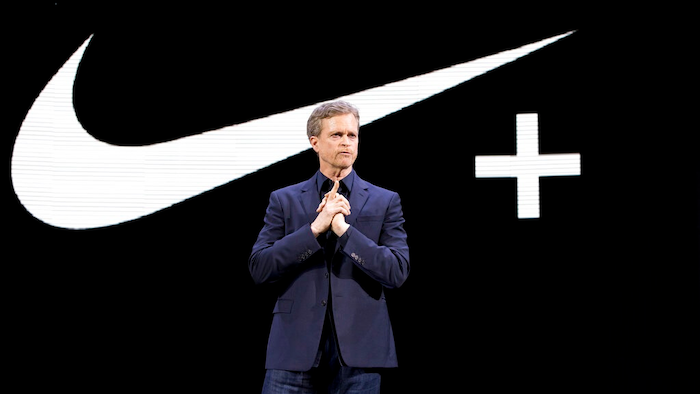 In this March 16, 2016, file photo Nike CEO Mark Parker speaks during a news conference in New York. Parker is stepping down early next year. He will be replaced by board member John Donahoe, who formerly ran e-commerce company eBay.
AP Photo/Mary Altaffer, File

He will be replaced by board member John Donahoe, who formerly ran e-commerce company eBay. Parker will become executive chairman of the board.

Nike's sales have been on the rise as the company focuses on selling more of its swoosh-branded sneakers online and on its apps. The company's first quarter earnings last month soared past expectations. But Nike has also been plagued by scandals recently.

Three weeks ago, renowned track coach Alberto Salazar was banned from the sport for four years by the U.S. Anti-Doping Agency for running experiments with supplements and testosterone that were bankrolled and supported by Nike, along with possessing and trafficking testosterone. Nike announced that it was shutting down its elite Oregon Project track and field program overseen by Salazar in the wake of the scandal.

Parker said in a TV interview with CNBC Tuesday that the scandal had "absolutely nothing" with him leaving the top job and that succession plans have been months in the making.

"This is not something that happens in a matter of weeks," he said.

Last year, allegations of misconduct and gender discrimination led to a leadership shakeup at the company. And earlier this spring, Nike announced changes to its contract policies after the New York Times published opinion articles and videos from female runners saying they risked losing pay if they became pregnant.

The Beaverton, Oregon-based sneaker seller said Donahue will step in as CEO on Jan. 13. Donahoe is the current president and CEO of ServiceNow, an information technology and software company.

"He really clicks a lot of the boxes that we're looking for," Parker said in the TV interview.

Nike's rival Under Armour will also have a new leader in the new year. On the same day Nike made its announcement, Under Armour said founder Kevin Plank will step aside as CEO in January and be replaced by Chief Operating Officer Patrik Frisk.