The organization has been known for wearing a mantle of “Buy American” and even publishes shopping guides on where to buy union-made goods.

The UAW has been struggling, for a while now, as fallout from corruption investigations has implicated more and more of its ranking members, including president Gary Jones, who abruptly resigned from the organization this past November.

Jones, who was being charged by the union of misusing funds, was just one of more than a dozen UAW execs pursued for various corruption allegations. But one exec that’s still leading the charge is Rory Gamble, the union president who stepped in take Gary Jones’s place. And what better way for the UAW to commemorate Gamble and the union’s fresh start, than by handing out promotional pens at a lobbying event this week with his name on them.

But there’s one problem. The Detroit News published a story last week that detailed backlash from union members who were not pleased to see the pens emblazoned with the name of their country of origin: China.

Meoshee Edwards, a 23-year UAW member who works at Detroit’s Hamtramck plant reportedly called the pens “hypocritical” and a spokesperson for the union said, simply, “the UAW agrees.” The UAW’s bidding process requires that items purchased come from union-made U.S. plants. So what happened? In this case, the union says the manufacturer flubbed the order.

And New Jersey-based Bankers Pen, Inc. says the union is 100 percent right – they did mess up the order, by grabbing pen parts from their China-made inventory, rather than the U.S.-made stock, due to a processing error. Bankers President Richard Danziger told the Detroit News that it was “absolutely someone in my facility” and that the company would do whatever it takes to make it right.

Unfortunately for the UAW, it’s just more drama at a time when the union doesn’t need it. The organization has been known for wearing a mantle of “Buy American” and even publishes shopping guides on where to buy union-made goods. 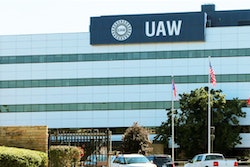