Only seven months into its existence, GE Additive is working on the world's largest metal 3D printer. Also, Airbus's high-speed copter cruises at 250 mph, and the first remote-controlled vessel navigates a harbor.

This week at the Paris Air Show, Airbus flew an autonomous aircraft, to which IEN readers responded, meh. So, we'll see if you're more built for speed. The next day, the company unveiled a high-speed demonstrator that they call the Racer. It’s designed to reach a cruise speed of about 250 mph, about 90 mph faster than the avg. copter, and it was based off of the X3. The X3 is believed to be the world's fastest helicopter developed by Eurocopter, which is now Airbus Helicopters. You see? It's all coming together.

They say Racer is a codename, but really, it's an acronym for Rapid And Cost-Effective Rotorcraft. I just think that we're trying too hard with the names these days. The Racer includes a patented double wing concept to improve aerodynamics, stiffness and weight reduction, as well as a hybrid metallic-composite airframe. It should also be quieter, and include lateral rotors as well as a main rotor both driven by two engines.

Airbus expects the Racer to reach final assembly in 2019, with the first flight scheduled for 2020. Not that the company is in any hurry, in a release, the CEO said that the Racer 'will pave the way for new time-sensitive services for 2030 and beyond.' So, if you can stave off a need for flight for life for another 13 years, you'll be in good hands.

A commercial vessel recently navigated the Copenhagen harbor in Denmark without incident. On its own, the fact seems relatively innocuous, but what makes this story interesting is that when the 28m Svitzer Hermod maneuvered around the harbor, the captain at the helm was on shore.

It was a demonstration of the world's first remotely-operated from Rolls-Royce and partner Svitzer, a global towage operator

The vessel was built in 2016 and has on board sensors that give the captain full awareness of the tug's surroundings, including radar, lidar, cameras, and audio. All of the information is relayed to a state-of-the-art Remote Operations Center on Shore, which looks like an immersive gamers wet dream. The captain controls the vessel’s position via satellite using the Rolls Royce Dynamic Positioning System. It also has a pair of Rolls-Royce diesel engines 2000 kW at 1800 rpm.

GE Additive has only been around for a little more than seven months and yet this week the company announced that it is developing what it is calling the world's largest laser-powered, metal 3D printer. Sounds like a busy seven months.

According Mohammad Ehteshami, VP and general manager of GE Additive, the printer, which they are calling Atlas, will be able to make metal parts 1-meter cube out of titanium, aluminum and other metals. Atlas will be capable of printing jet engine structural components for single aisle aircraft. Of course, it will have applications for manufacturers in automotive, power, and oil & gas, but the news came out at the Paris Air Show, so thus the emphasis on aerospace

The largest 3D metal printer on the market is actually the X Line 2000R from Concept Laser. Airbus uses it to make wing brackets. If you recall, GE paid $599 million for a majority stake in Concept in late October. The Atlas is being designed and developed by engineers from Concept  and GE.

The company didn't offer a look at the machine, but it has plans to unveil a demonstrator around the division’s one year anniversary at the Formnext Show held in Germany.

Last year at Formnext, Ehteshami, who has 30+ years with GE Aviation, said that GE plans to manufacture 10K additive machines over the next ten years for customers, and 1,000 more machines just for GE. Not a bad start.

I'm David Mantey, and this is Engineering by Design. 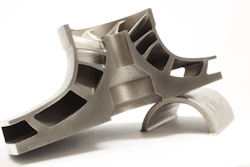 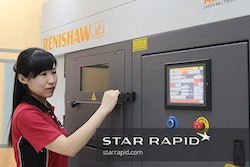 What is Powder Bed Fusion?