The oft-proclaimed solidarity among nations waging battle against the pandemic has been tested — if not shattered — by national and corporate self-interest. 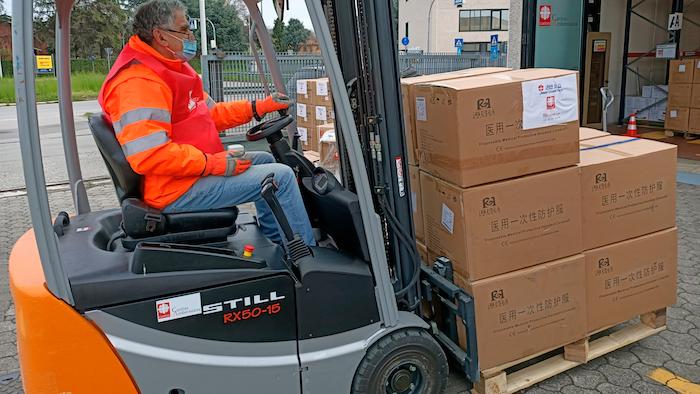 An operator wearing a face mask to protect himself against the spread of Covid-19 stacks boxes of medical supplies from Chinese charity Jinde Charities at the Italian charity Caritas Ambrosiana logistic center in Burago, in Monza Brianza, northern Italy, Wednesday, April 1, 2020.
Caritas Ambrosiana via AP

The tiny republic, wedged next to what would be two of Italy’s hardest-hit provinces in the COVID-19 outbreak, had already registered 11 deaths by March 17 — a sizeable number in a country of just 33,000, and a harbinger of worse to come. So authorities sent off a bank transfer to a supplier in Lugano, Switzerland, to pay for a half-million masks, to be shared with Italian neighbors.

The next day, the truck returned, empty. The company was refusing to provide the masks.

It’s not clear whether the mask supplier, which was not identified, refused to deliver because another customer offered more. But what is clear is that the oft-proclaimed solidarity among nations waging battle against the pandemic has been tested — if not shattered — by national and corporate self-interest.

A health official in France's hard-hit eastern region said U.S. officials swooped in at a Chinese airport to spirit away a planeload of masks that France had ordered.

"On the tarmac, the Americans arrive, take out cash and pay three or four times more for our orders, so we really have to fight," Dr. Jean Rottner, an emergency room doctor in Mulhouse, told RTL radio.

The U.S. Embassy in Paris on Friday insisted that no one from the federal government bought masks destined for France. President Donald Trump has suggested, however, that states get their own medical equipment to fight the virus, setting off a mad scramble among state officials.

France, meanwhile, has laid claim to supplies within its borders. In Lyon, inside the main southern European distribution facility of the Swedish medical supply company Molnlycke, were millions of masks that France was reluctant to let go for export.

“We recognize that France has imposed an export ban for face masks and this ban was just extended,” said Jenny Johansson, the company’s global manager for corporate communications. She declined to comment on reports that France ultimately allowed a million masks apiece to go to Spain and Italy.

“However, this is not only about France,” she said. “We see government restrictions across most countries in which we are active.”

The European Union, a bloc of 27 nations built upon open borders and markets, has tried to temper this every-country-for-itself free-for-all.

In any case, Faessler on Wednesday acknowledged that confusion and complexities mark the frantic scramble to acquire vital supplies like masks. “Brussels tried to regulate” this commerce, she said, but many countries have gone their own way.

The EU's internal market commissioner, Thierry Breton, told the Italian daily Corriere della Sera that progress had been made in dealing with exports of medical equipment by France, Germany and some other nations.

“At the moment, only Poland and Slovakia are keeping the ban, but we’re discussing it, and a solution will be reached,’’ Breton was quoted as saying.

Meanwhile, Spain and Italy, which together have over one-half of the world's 54,000 coronavirus deaths, are increasingly taking steps to restrict the flow of supplies.

As the daily number of infections in Italy grew by the dozens, then hundreds, then thousands, many nations blocked exports to keep their own medical supplies production within their borders, said Agostino Miozzo, director general of international relations for Italy’s Civil Protection agency.

“We found ourselves in extreme difficulty in acquiring” medical supplies, he said.

Last month, Italian customs police seized some 800,000 masks and disposable gloves that were about to be sent to Switzerland.

Spain has launched three weekly flights to China to directly ferry home medical supplies. Spanish Health Minister Salvador Illa has called China’s medical supply market “crazy.” Italy, too, has taken to using military planes to fly in masks and respirators from China and elsewhere, minimizing the risks that supplies will be diverted or seized by third countries.

The United States, which has twice as many infections as any other nation now, is also moving supplies like thermometers, gowns, masks and gloves via air bridge, notably from Asia and Central America, according to the U.S. agency FEMA.

Massachusetts Gov. Charlie Baker took an unconventional approach in the scramble for supplies in his state: He called on the New England Patriots, the American football team.

The team’s private plane landed in Boston from China on Thursday evening carrying more than a million masks. Baker secured the N95 masks from Chinese manufacturers but had no way of getting them to the U.S. without the assist from the team.

After some incidents in which the flow of materials were blocked, countries have tried to make amends for what they say were missteps.

Last month, Czech Foreign Minister Tomas Petricek, apologizing to Italy, said the Italians were being given 110,000 masks and thousands of respirators to compensate for those mistakenly seized in a raid on a warehouse in the Czech town of Lovosice.

The devices had been donated by China’s Red Cross for the Chinese community in Italy. The raid had been launched to break up what Czech Interior Minister Jan Hamacek called an “immoral” scheme to jack up the prices a company was charging the Prague government.

“I didn’t say Italy. I said it was hijacked at sea," the minister insisted, adding, “All of the European Union is living in a state of hysteria.”