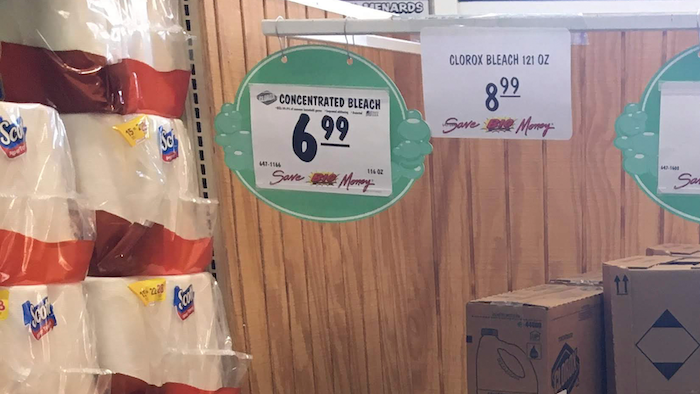 This March 10, 2020 photo made by an investigator with the Michigan Attorney General's Office shows gallons of Clorox bleach on display priced at $8.99 each at a Menards store in Jackson, Mich. A price sticker on an empty shelf elsewhere in the store listed a gallon of Clorox bleach as $4.47. A Menards spokesman told AP the price was different because Clorox recently began offering new, upgraded concentrations of bleach. The company was “disappointed” and taking the AG’s office cease-and-desist letter “very seriously.”
Michigan attorney general's Office via AP

One store advertised hand sanitizer at $60 a bottle. Another was accused of hawking it at $1 a squirt. Chain stores offered $26 thermometers and face masks at the “everyday low price” of $39.95 a pair, while a convenience store touted toilet paper at $10 a roll next to a sign reading: “This is not a joke.”

Across a country where lines are long, some shelves are empty and patience is thin, authorities are receiving a surge of reports about merchants trying to cash in on the coronavirus crisis with outrageous prices, phony cures and other scams. An Associated Press survey of attorneys general or consumer protection agencies nationwide found reports already exceeded 5,000, with hundreds more arriving daily.

“Greed is a powerful motivator for some people,” said Josh Stein, the attorney general of North Carolina, where the number of reports jumped from 72 to 131 one day earlier this week. “It is inexcusable to prey on people in a vulnerable time to make a quick buck.”

AP’s 50-state survey is the most comprehensive look so far at the emerging problem. In all, 41 states responded with numbers that included both tips and formally filed complaints against mom-and-pop stores and big-box retailers alike.

AP’s count is certainly low also because it only includes cases in which someone went online or called to register a grievance. Many others went to the court of social media to vent their outrage.

“STOP SHOPPING HERE!!” one woman blared on Facebook next to cellphone photos of a Southern California grocery charging $6.98 for a gallon of milk and $14.99 for cheddar cheese. “There are families out there who really need groceries and they’re overcharging.”

Beyond AP's state count, individual cities are carrying out efforts to prevent exploitation. New York City alone has received more than 1,000 complaints, issued 550 violations and imposed $275,000 in fines for price gouging — including one case in which a store was accused of selling bottles of Purell at $79 each. Among the items the city is preventing stores from jacking up the prices on: aloe vera and rubbing alcohol, the ingredients that can be combined to make hand sanitizer. 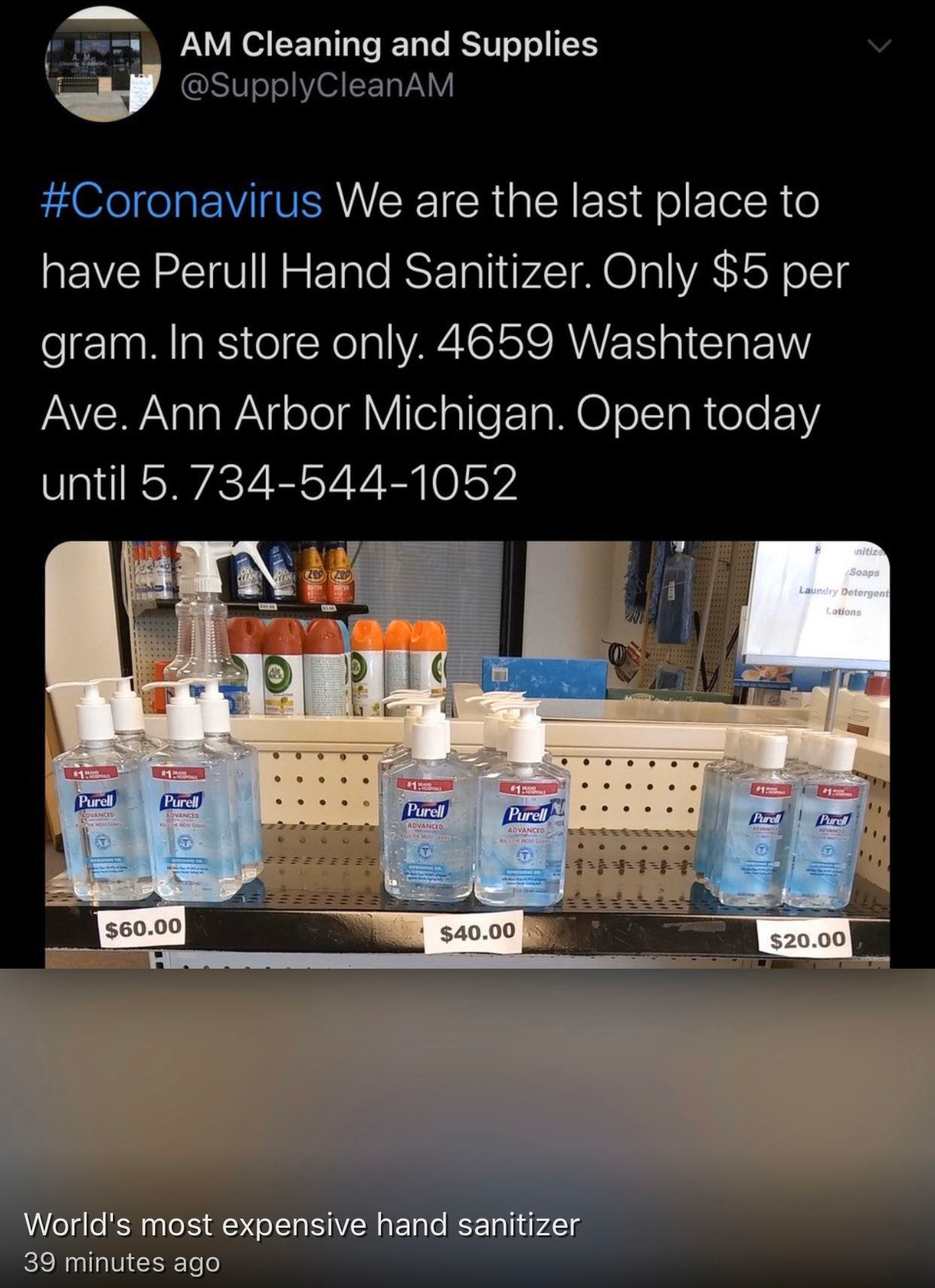 Three states, including California, refused to share how many reports they've received, and several rural states said they had none. Those that did are still checking out many of the claims. While some have gone to court against sellers, others have determined cases didn’t meet their legal standard for price gouging, which generally involves an increase of more than 10%.

Many states said they try to resolve reports not by pursuing fines or criminal charges but by confronting the retailer, which typically apologizes and lowers the price.

In Maine, investigators had photographic evidence from a shopper showing the $10 rolls of toilet paper. In Tennessee, where state lawyers forced two brothers to stop selling the more than 17,000 bottles of hand sanitizer they had hoarded, investigators checked out a tip that a store was charging $1 for each squirt.

There were reports of overpriced rice in Wisconsin and potatoes in Idaho. In Connecticut, a seller reportedly inflated the cost of medical masks 10 times over the normal value. One couple in Ohio reported that a thermometer they bought for $8 at a national chain store cost $26 two days later.

“This is so wrong at a time of crisis,” the wife wrote in her report about the thermometer. “Contact them and tell them they can't do this.”

Pennsylvania, which with more than 1,200 reports earlier this week had the most in the nation, created an email address dedicated to complaints. Oregon launched a price-gouging hotline this week. Oklahoma’s attorney general is shifting agents to its consumer protection unit.

A small slice of reports involved not high prices but false claims that products or services can detect or even cure the virus, which in most people causes only mild or moderate symptoms but can be deadly for some. The U.S. Food and Drug Administration has approved no treatments or vaccines, and the National Institutes of Health says no scientific evidence exists to suggest alternative remedies help.

That hasn’t stopped the likes of televangelist Jim Bakker pushing treatments with tiny silver particles and conspiracy theorist and Infowars host Alex Jones advertising toothpastes, creams and other products on his radio show. Both were targets last week of cease-and-desist letters from New York's attorney general, and the federal government has sent seven warning letters over false claims.

One went to an Ann Arbor cleaning store that used its Twitter account to advertise Purell at prices that soared from $7.50 for one large bottle to $60 in mere days. After customer backlash, A.M. Cleaning and Supplies called the tweeted advertisement a “false post,” lowered the prices and changed sales signs in the store.

The owner, Anthony Marshall, said the higher prices were intended to be for eight bottles — not one bottle, as his advertisement’s text indicated. “We never sold them at that price,” he said.

Another warning letter went to the home improvement chain Menards. Some of its stores were accused of doubling the price of a gallon of Clorox bleach to $8.99 and offering two types of 3M respirator masks for an “everyday low price” of $39.95 a pair — more than four times what Home Depot advertised.

“I'm very disappointed with Menards' choice of actions during this uneasy time,” one man who believed he was overcharged for bleach wrote in an affidavit.

Menards spokesman Jeff Abbott said in a statement that the Wisconsin-based chain considered the Clorox price reasonable because, while like other bleach it was sold in a gallon jug, it was more concentrated and would last customers twice as long. The statement didn’t address the respirator masks.

“We are disappointed and are taking this very seriously,” Abbott said.

Authorities in states including Florida were forwarding to the nation’s online retail giants — including Amazon, Walmart and eBay — reports that third-party sellers on their sites were overcharging.

In a statement, Walmart spokesman Kevin Gardner said the company is “taking a firm stance” against possible price gouging on its Marketplace site. Walmart’s policy calls for removing listings that are unfairly priced.

A bipartisan group of House lawmakers this week urged the Justice Department to police price gouging so that people "have access to the items they need to protect themselves, their families, and their communities.”

In an AP interview this week, Attorney General William Barr pledged that the Justice Department would “come down hard” on profiteers so they are not “taking advantage to further hurt the American people.”

On Thursday, the Justice Department announced it is activating a central fraud hotline (1-866-720-5721 or disaster@leo.gov) and has ordered U.S. attorneys across the nation to appoint special coronavirus fraud coordinators.

Consumers who want to report cases directly to their state's authorities can go to https://www.consumerresources.org/, a website run by the National Association of Attorneys General.