They remain open to cross-border workers and trucks carrying critical goods like food and medicine. 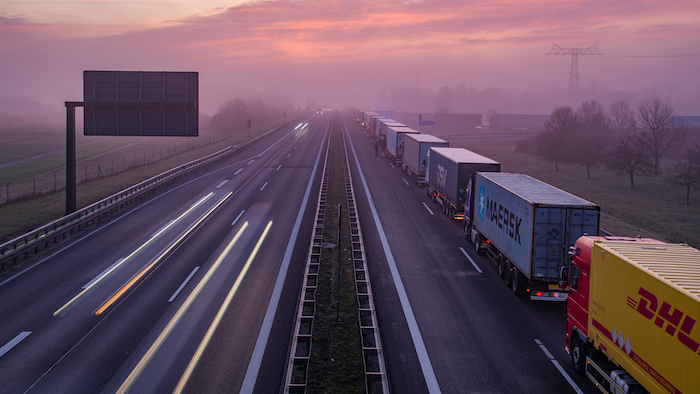 Trucks are jammed in the early morning on Autobahn 12 in front of the German-Polish border crossing near Frankfurt (Oder), Germany, Wednesday, March 18, 2020.
Patrick Pleul/dpa via AP

BERLIN (AP) — Desperate travelers choked European border crossings Wednesday after countries implemented strict controls to try to slow the spread of the coronavirus, which has now infected more than 200,000 people worldwide and killed more than 8,000.

In releasing the new figures, Johns Hopkins University also said more than 82,000 people recovered from the virus, which causes only mild or moderate symptoms such as fever and cough for most people, although severe illness is more likely in the elderly and those with existing health problems.

European leaders have closed borders to nonessential traffic, while leaving many frontiers open to cross-border workers and trucks carrying critical goods like food and medicine. That has led to massive backups of travelers and trucks alike.

To try to alleviate some of the pressure from eastern Europeans stuck in Austria trying to return home, Hungary overnight opened its borders in phases. Bulgarian citizens were first allowed to cross in carefully controlled convoys, then Romanians had a turn.

But by early Wednesday on the Austrian side, trucks were backed up for 28 kilometers (17 miles) and cars for 14 kilometers (nearly 9 miles) as rules allowing only Hungarians or cargo trucks to cross kicked back in.

In a second attempt, Hungary again opened the borders Wednesday through Thursday morning to allow Romanians, Bulgarians and Serbians to transit.

“The traffic jam is slowly starting to dissolve,” said Austrian Interior Minister Karl Nehammer, adding that officials were trying to work on a more permanent solution.

“We're trying to manage the traffic situation as best as possible,” he said.

Serbian President Aleksandar Vucic expressed outrage as his citizens returned, claiming that 40,000 coming from jobs abroad had largely ignored orders to go into self-isolation at home, putting others in the country at risk.

Italy has been the second hardest hit country with more than 31,000 cases, behind more than 81,000 in China.

But German health authorities warned it was just a matter of time before the numbers spike unless people heed warnings to avoid contact.

Lothar Wieler, head of the Germany's disease control institute, warned that unless social contacts are effectively reduced there could be up to 10 million infected people in Germany in two to three months.

He said measures taken now could sharply reduce the spread and help ensure that those who do need medical help can be treated.

Around the world, nations faced the same issue of trying to slow the spread.

President Donald Trump announced that the U.S. and Canada had agreed close its border to “nonessential traffic,” but assured that trade wouldn't be affected.

In Southeast Asia, the causeway between Malaysia and the financial hub of Singapore was eerily quiet after Malaysia shut its borders, while the Philippines backed down on an order giving foreigners 72 hours to leave from a large part of its main island.

Trump's administration was considering a plan to immediately return to Mexico all people who cross America's southern border illegally, according to two officials who spoke to The Associated Press on the condition of anonymity because the plan hasn’t been finalized.

The coronavirus is present in every U.S. state after West Virginia reported an infection. In far-flung Hawaii, the governor encouraged travelers to postpone their island vacations for at least the next 30 days, while the governor of Nevada ordered a monthlong closure of the state's casinos.

Increasingly worried about the economic fallout of the global shutdown, the U.S., Britain and the Netherlands announced rescue packages totaling hundreds of billions of dollars, while longtime International Monetary Fund critic Venezuela asked the institution for a $5 billion loan.

Major Asian stock markets fell back Wednesday after early gains, and the vicious swings on Wall Street continued with the S&P 500 sinking more than 5% in early trading to erase most of the prior’s day respite.

Markets have been incredibly volatile for weeks as Wall Street and the White House acknowledge an increasing risk of a recession due to the pandemic. The typical day this month has seen the stock market swing by 4.9%. Over the last decade, the typical move was just 0.4%.

In Brussels, Ursula von der Leyen, the European Commission president, said there had been "a unanimous and united approach” to the decision to prohibit most foreigners from entering the EU for 30 days.

But so far, EU efforts to smooth the transition have failed.

On Wednesday, thousands of trucks remained backed up in Lithuania on roads into Poland, after Warsaw ordered strict measures that include testing every driver for symptoms of COVID-19, the illness caused by the coronavirus. The line of trucks was 60 kilometers (37 miles) long on Tuesday night.

“The Polish and Lithuanian governments have opened a second crossing, but that did not help much,” said border police spokesman Rokas Pukinsas.

Traffic was similarly backed up on Germany's border with Poland.

Elsewhere, Malaysians endured traffic jams for hours as they tried to get into Singapore before the border closed. More than 300,000 people commute daily to Singapore and many have chosen to stay there during the lockdown.

Malaysia's restricted movement order came after a sharp spike in coronavirus cases to 790, making it the worst-affected country in Southeast Asia.

Taiwan said Wednesday that it too would ban foreigners from entry and citizens would have to self-quarantine at home for 14 days.

Even tourists on Ecuador's iconic Galapagos islands — 1,000 kilometers (620 miles) off the South American mainland — have been affected. Canadian Jessy Lamontaine and her family were stuck on the island when flights were suspended.

“I was in tears this morning,” Lamontaine said. “I couldn’t get any answers from the airline. I had no money and didn’t know whether I was going to keep my job.”

The EU said it was trying to help repatriate around 80,000 citizens stuck outside Europe, but that it faces huge challenges — including finding flights.

“This is not always a given because other countries are also cancelling flights to and from Europe,” EU executive commission spokesman Eric Mamer said. “From a logistical point of view, it is clearly a major challenge.”

Some bright spots emerged. Wuhan, the central Chinese city where the virus was first detected late last year and which has been under lockdown for weeks, reported just one new case for a second straight day Wednesday.

In the U.S., the death toll surpassed 100, and officials urged older Americans and those with health problems to stay home. They also recommended all gatherings be capped at 10 people.

Janitor Miguel Aguirre, his wife and two children were the only people on a normally bustling street near City Hall. He showed up to work because he needed the money but his supervisor texted him to leave. He brought his two daughters because schools had closed. He already lost his second job at a hotel when tourism conferences were canceled.