The company halted shipments after learning of labor abuse. 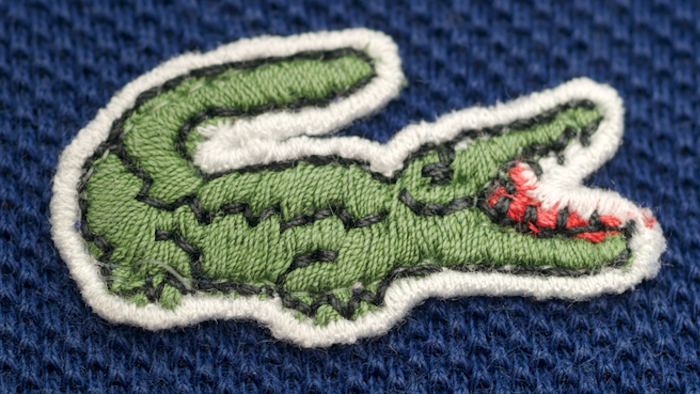 Gloves made in China for the popular French brand Lacoste appear to have been sewn inside a factory where ethnic minorities face forced ideological and behavioral re-education, according to a U.S.-based labor rights group.

Lacoste, known for its iconic little green crocodile logo, says it halted shipments after learning of labor abuse in its supply chain from Washington, D.C.-based labor rights group Worker Rights Consortium. The group alleges that Uigher Muslims and other ethnic minorities are being forced to sew the Lacoste-branded gloves.

A Lacoste spokeswoman told The Associated Press that the Chinese factory had been visited by auditors who interviewed workers and didn’t report any concerns.

“Lacoste prohibits the use of forced, mandatory, or unpaid labor of any type," company spokeswoman Nathalie Beguinot said, adding that 95 pairs of gloves from the factory in question were sold in Europe and that unsold gloves made at the Yili Zhuo Wan Garment Manufacturing Co. are currently warehoused.

Worker Rights Consortium executive director Scott Nova said Lacoste and any other buyers should have known better than to trust auditors who interview workers on site, where they can't speak freely.

“Given the climate of terror the government has created in the Xinjiang Uygur Autonomous Region, given its intensive efforts to conceal proof of forced labor from foreign eyes, and given the pervasive surveillance apparatus that makes a confidential conversation oxymoronic, no worker is going to tell a factory auditor that her employer and the government are breaking the law by forcing her to work against her will," Nova said.

Officials at Yili Zhuo Wan could not be reached for comment. Last year, media and nonprofit group reports described forced labor and indoctrination of hundreds of people inside the factory.

The people were swept up as part of a massive Chinese government crackdown that by some estimates has locked away more than 1 million ethnic minorities, most of them Muslims, over the past three years, according to the reports. The Chinese government denies this. It has said that the detention centers are for voluntary job training and that it does not discriminate based on religion.

Last year the Washington-based Center for Strategic and International Studies interviewed two former Yili Zhuo Wan workers, who said they were forced to study Mandarin and praise the government. One, a trained seamstress, said she was paid about $37 for her first month and a half of work.

“This is basically state-encouraged forced labor and part of a much broader pattern of extremely severe human rights violation," said Amy Lehr, who co-authored a CSIS report that included claims of forced labor in Xinjiang. “It's an attempt to eradicate a culture and religion."

It's illegal to import products of forced labor into the United States. Lacoste says the gloves went only to France. The AP and others have repeatedly tracked everything from sportswear to pajamas from detention camps in Xinjiang to the U.S. and Europe. Last fall, U.S. Customs and Border Protection slapped detention orders on several shipments from the region. The orders are used to hold shipping containers at the U.S. ports of entry until the agency can investigate the claims of wrongdoing.

Massachusetts Rep. James McGovern, who chairs the Congressional-Executive Commission on China, says he'd like to stop the import of all forced labor-made goods from the region.

“No one should profit," McGovern said, “from the horrific human rights crimes being committed in Xinjiang.”