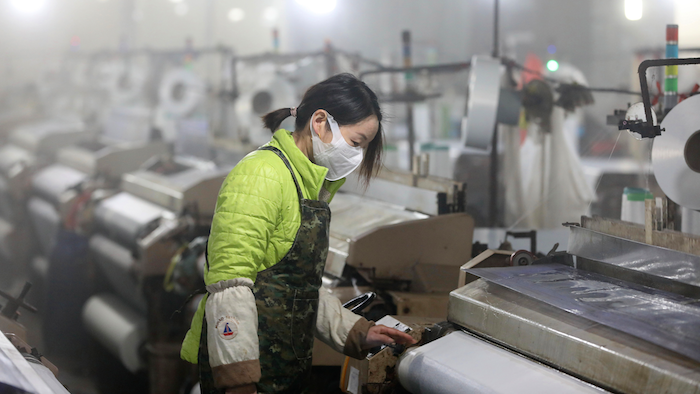 In this Feb. 27, 2020 photo, a woman works on a spinning mill in a textile factory in Hangzhou in eastern China's Zhejiang Province. A gauge of Chinese manufacturing plunged in February by an even wider margin than expected after efforts to contain a virus outbreak shut down much of the world's second-largest economy.
Chinatopix via AP

WASHINGTON (AP) — American factories expanded in February for the second straight month, despite disruptions caused by the coronavirus outbreak. The winning streak, however, may prove short-lived.

The Institute for Supply Management, an association of purchasing managers, said Monday that its manufacturing index registered 50.1 last month. That is down from 50.9 in January. But anything above 50 signals growth.

The February reading was slightly lower than economists expected.

The institute's index showed that American manufacturing contracted from August through December last year, hobbled by President Donald Trump's trade wars, which raised costs and generated uncertainty about where to locate factories and buy supplies.

Much of China has been locked down because of the coronavirus, disrupting supply chains that many U.S. companies rely on.

Timothy Fiore, chair of the institute's manufacturing survey committee, said factories were expanding but only "at a weak level.''

Economists Oren Klachkin and Gregory Daco of Oxford Economics predicted that the February expansion would prove “a last gasp'' before the index returns to negative.

Jim Bianco, head of his own financial research firm, attributed the February growth to “a statistical quirk’’ in a tweet. Deliveries from suppliers slowed sharply -- normally a good sign that the economy is booming and factories are straining to keep up — but now evidence of clogged up supply chains.

“Suppliers are having more difficulty delivering,'' Fiore said, adding “This could easily have been a contraction month.''