Growth has slowed significantly due to a number of global uncertainties. 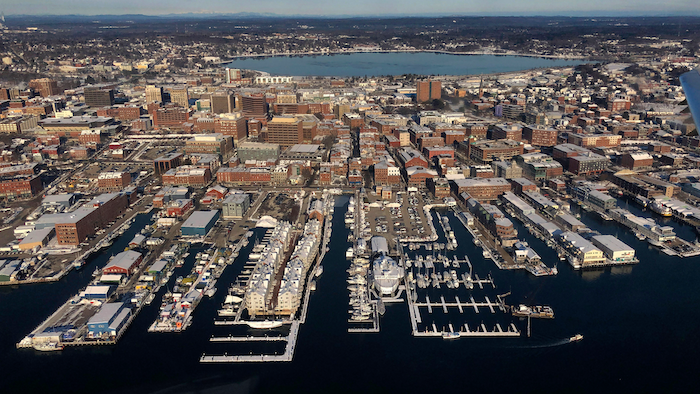 This file photo shows the waterfront in Portland, Maine. The Commerce Department recently issued the first estimate of how the U.S. economy performed in the fourth quarter.
AP Photo/Robert F. Bukaty, File

WASHINGTON (AP) — The U.S. economy grew at a moderate 2.1 percent rate in the final three months of 2019, capping a year when growth slowed significantly due to a weaker global economy and trade war uncertainties.

The Commerce Department reported Thursday that the fourth-quarter increase in the gross domestic product, the economy's total output of goods and services, matched the 2.1 percent gain of the third quarter. Both quarters were well below the 3.1 percent surge seen in the first quarter.

For the October-December quarter, growth was supported by solid but slower consumer spending and an improvement in the trade deficit. Those factors offset a further drop in business investment in new plants and equipment and a slowdown in restocking store shelves. For the whole year, GDP increased 2.3 percent, the weakest performance in three years and a slowdown from a 2.9 percent gain in 2018 when the economy got a boost from President Donald Trump's tax cuts and billions of dollars in increased government spending.

Economists look for even slower growth in 2020 of around 1.8 percent. But that outcome could be threatened by various threats from a spreading coronavirus in China to a flare-up in trade tensions between the United States and China. Even the U.S. presidential election could end up having an adverse effect on growth if a hard-fought campaign increases uncertainty among consumers and businesses and causes them to cut back on spending.

While Trump has not achieved his GDP growth goals, he has seen unemployment fall to a 50-year low during his presidency, and after trade tensions with China began to cool late last year, the stock market rebounded and climbed to new record highs. "I think the economy is President Trump's friend, but it is not his best friend," said Mark Zandi, chief economist at Moody's Analytics. "Unemployment is low, the stock market is high, wage growth is sturdy and gas prices are low."

But Zandi said what will matter most in the election is how the economy is performing in key swing states such as Pennsylvania, Michigan and Wisconsin and there, Zandi said, the trade war has "done a lot of damage" by disrupting manufacturing.

For the fourth quarter, consumer spending, which accounts for 70 percent of economic activity, slowed to an annual gain of 1.8 percent. While that was still a solid number, it was down from a spending surge of 4.6 percent in the second quarter and 3.2 percent in the third quarter. The slowdown was led by a drop-off in new car sales.

Business investment spending fell for a third straight quarter, dropping at a rate of 1.5 percent, a decline that has been blamed on business uncertainty generated by the rising trade tensions. The hope is that business will start investing again now that the Trump administration has declared a ceasefire with China as both countries signed a Phase One trade deal earlier this month.

Business stockpiling subtracted a full percentage-point to growth with part of that blamed on the General Motors strike which cut into car inventories.