Markets throughout Europe and Asia, as well as the U.S., have felt the effects. 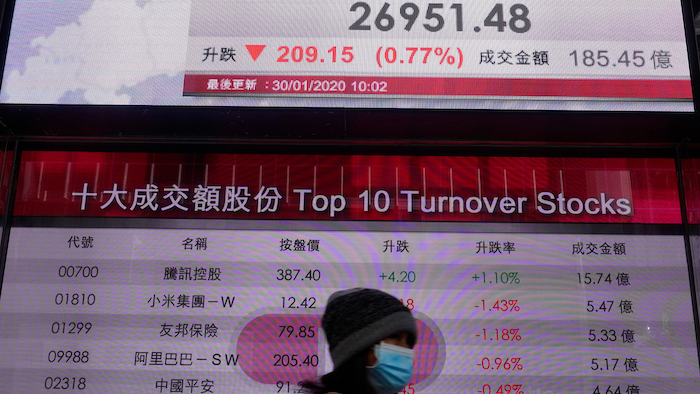 Shares tumbled in Europe and Asia on Thursday as the impact of the virus outbreak in China expanded to include flight cancellations and other wider precautions to help stop its spread.

The declines looked likely to carry over into U.S. trading. The future contract for the S&P 500 lost 0.7 percent, as did the future for the Dow.

The death toll from the virus rose to 170, with 7,711 people in China and elsewhere confirmed infected, as foreign evacuees from the worst-hit region in central China began returning home under close observation.

The World Health Organization was due to meet Thursday in Geneva to consider whether to issue a global alarm that might prompt more controls on movement inside and to and from China, resulting in greater disruptions to businesses and markets.

Overnight, stocks lost momentum on Wall Street as investors tuned in to a news conference by Federal Reserve Chairman Jerome Powell. Speaking to reporters Wednesday afternoon, Powell acknowledged that there's a risk the outbreak could slow the global economy. But stocks barely budged after the Fed announced would leave its benchmark interest rate unchanged at a low level. The move, which was widely expected, reflects the central bank's mostly positive view of the U.S. economy.

Last year, the Fed cut its benchmark interest rate three times after having raised it four times in 2018. Powell credits those rate cuts with revitalizing the housing market, which had stumbled early last year, and offsetting some of the drag from President Donald Trump's trade war with China.

Investors have been assessing quarterly reports from big companies. On Thursday, Coca-Cola, UPS, Amazon and Visa are scheduled to release results. Caterpillar and Exxon Mobil will report results on Friday.