The U.S. has put a series of tariffs on Chinese trade goods and China has responded by letting its currency drop, increasing uncertainty for businesses and exporters.

PARIS (AP) — The trade war between the United States and China and a broader decline in world economic growth are weakening the demand for oil and pushing prices down, the International Energy Agency said Friday.

The Paris-based agency, which advises many developed countries on energy policies, cut its forecast for oil demand growth this year and next as trade tensions weigh on activity in the energy-hungry manufacturing sectors around the world. The U.S. has put a series of tariffs on Chinese trade goods and China has responded by letting its currency drop, increasing uncertainty for businesses and exporters around the world.

"The prospects for a political agreement between China and the United States on trade have worsened. This could lead to reduced trade activity and less oil demand growth," the agency said in a monthly report on the energy market. The trade dispute is worsening a downturn in global growth and dragging down demand for energy. The price of crude has fallen, with the international benchmark hitting its lowest since January, below $57 a barrel.

The IEA cut its forecast for oil demand growth by 0.1 million barrels a day, to 1.1 million barrels this year and to 1.3 million barrels a day in 2020. It said that tensions in the Persian Gulf, where some oil tankers have been attacked amid a diplomatic standoff between the U.S. and Iran in particular, have heightened concerns. But the biggest impact on demand comes from trade disputes and lower growth.

"The outlook is fragile with a greater likelihood of a downward revision (to demand) than an upward one," the IEA said. Supply, meanwhile, remains ample despite efforts by some countries, like Saudi Arabia to produce less to support the price of oil. 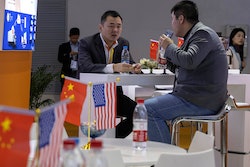