Japan: Export Step Not Aimed at Hurting Ties with Seoul

Japan's recent export control is seen by South Koreans as an attack on the industry at the core of its economy and reminding them of wartime grievances. 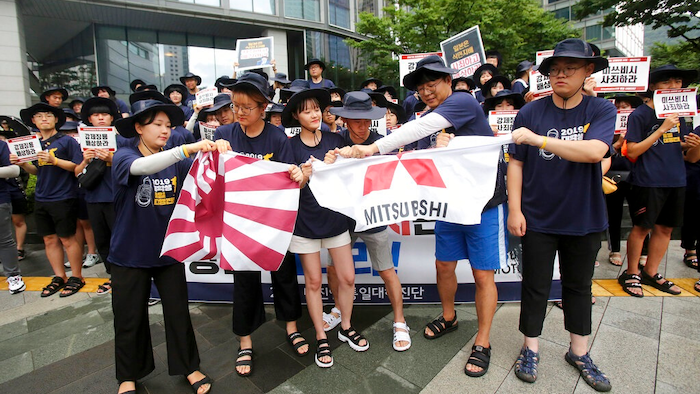 South Korean college students tear banners showing an image of a Japanese rising sun flag and the logo of Mitsubishi Corp. during a rally to denounce Japan's new trade restrictions on South Korea in front of the office of Mitsubishi Corp. in Seoul, South Korea, Wednesday, Aug. 7, 2019. Japanese Prime Minister Shinzo Abe said Tuesday that the main cause of escalating tensions between Japan and South Korea is a loss of trust over court rulings ordering Japanese companies to compensate South Koreans for forced labor during World War II.
AP Photo/Ahn Young-joon

TOKYO (AP) — Japan's government spokesman says his country's downgrading of South Korea's trade status is not intended as retaliation for disputes over court rulings ordering Japanese companies to pay compensation for their treatment of Korean laborers during World War II.

A decision by the Cabinet last Friday to drop South Korea from a list of countries granted preferred trade status became official Wednesday when it was published in Japan's official gazette "kampo." The measure will take effect on Aug. 28.

The step adds to Japan's export controls imposed in July on three key materials for South Korea's semiconductor industry, an attempt seen by South Koreans as an attack on the industry at the core of its economy and reminding them of the wartime grievances.

Japan colonized the Korean Peninsula from 1910 to 1945, and insists all compensation issues were settled under a 1965 agreement normalizing ties.

Chief Cabinet Secretary Yoshihide Suga said Wednesday that the measures are about Japan's national security concerns and not countermeasures for the court rulings. Japan says South Korea violated international law by moving to force Japanese companies to compensate beyond the 1965 agreement, under which Japan already provided $500 million in grants and loans.

"The revision was a necessary step for Japan to appropriately carry out its export control system from a national security point of view," Suga said. "It was not intended to affect Japan-South Korea relations, let alone economic countermeasures or retaliation."

Japanese officials have said that South Korea, with its insufficient export control system and operation, no longer qualifies as a country with preferential status for Japanese shipments.

Suga said the measure only puts South Korea back to a standard class, or second tier of four divisions. "It's not an export ban," he said.

Japanese officials have also denied South Korea's allegation that they are using trade to retaliate, but Prime Minister Shinzo Abe and other officials had earlier suggested a link between the two issues. The officials kept mentioning new reasons, including lack of communication between the two export control authorities, triggering doubts that the real issue may be the historical dispute.

Abe, asked about the deteriorating relations between the neighbors and a prospect for meeting South Korean President Moon Jae-in at upcoming international events, said the main cause of escalating tensions between the two countries is the wartime compensation issue.

The dispute comes after South Korea refused a Japanese request for third-party arbitration under the 1965 treaty, and Tokyo rejection of Seoul's proposal for a joint compensation fund.

The timing of Tokyo's initial announcement just ahead of July parliamentary elections also prompted speculation that it was politically motivated.

The prolonged disputes also distract the countries from cooperating in the face of security threats including those from North Korea. The spat is also causing damage to the semiconductor industries in South Korea and consumer products in Japan, affecting the global economy, and hurting Japan's image as a regional economic leader promoting free trade and criticizing protectionism, experts say.