"We can now confidently say new vehicle sales are past their peak," said Jeremy Acevedo, Edmunds.com's manager of industry analysis.

Tom Krisher
This June 24, 2018, photo shows unsold 2018 Suburbans at a Chevrolet dealership in Englewood, Colo. Automobile sales in the U.S. fell 2% in the first quarter, another sign the nation's economy is starting to slow.
AP Photo/David Zalubowski

DETROIT (AP) — Automobile sales in the U.S. fell 2% in the first quarter, another sign the nation's economy is starting to slow.

Automakers sold just over 4 million vehicles from January through March, according to Ward's Automotive Intelligence, and industry analysts blame the decline on rising vehicle prices, competition from an abundant supply of late-model used vehicles and relatively high interest rates. Weak sales of cars, harsh winter weather and the partial government shutdown also had an impact.

Most analysts are predicting vehicle sales of around 16.9 million this year, still strong but down from last year's 17.27 million. Sales peaked in 2016 at 17.55 million.

Prices are a big factor. The National Automobile Dealers' Association reported that the average new vehicle sales price was $36,410 in the end of the first quarter, up 3.3% from a year ago. Auto-loan interest rates, on average, hit their highest point in a decade at 6.36%, up from 5.66% a year ago, according to Edmunds, which provides content to The Associated Press.

The report of falling sales came a day after the Commerce Department reported that retail sales dropped 0.2% in February as consumers pulled back from spending on building materials, groceries, furniture, electronics and clothing.

The recent dip in auto sales and consumer spending suggests more Americans are tightening their belts amid slowing global growth and waning effects of President Donald Trump's tax cuts at the end of 2017.

Analysts for Cox Automotive said the economy is seeing rapid deceleration from a peak in growth during the past year. Gross domestic product growth hit 4.2% in last year's second quarter, but has slowed since. A revision in fourth-quarter figures took growth to 2.2%.

The U.S. economy also is affected by a slowing global economy that's been hit by trade uncertainties, the Cox analysts said.

Charles Chesbrough, senior economist for Cox Automotive, said Americans have bought 85 million new vehicles during the past five years. "There's not that much demand that's left unfulfilled out there," he said. "Were in the late stages of this business cycle."

Plus, Chesbrough said he expects a record 4.1 million vehicles to return to the market this year largely from two- and three-year leases. That gives consumers a choice to buy late-model vehicles at around a 40% discount from new ones, he said.

But even with a decline this quarter, auto sales are still healthy. Patrick Manzi, senior economist with the dealers' association, said that although consumer confidence is waning, it remains high, showing that consumers still are willing to make large purchases. Also, job gains have been steady and wage growth has been accelerating.

Here's how major automakers fared from January through March:

— General Motors, down 7% to 665,840. Chevrolet Silverado pickup sales were off 15.7%, and it was bumped from its normal spot as the nation's No. 2-selling vehicle by the Ram pickup. 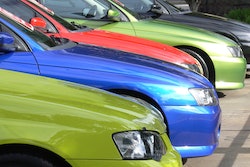