There's a one-in-four chance it could slip into recession this year — even if a Brexit deal is reached. 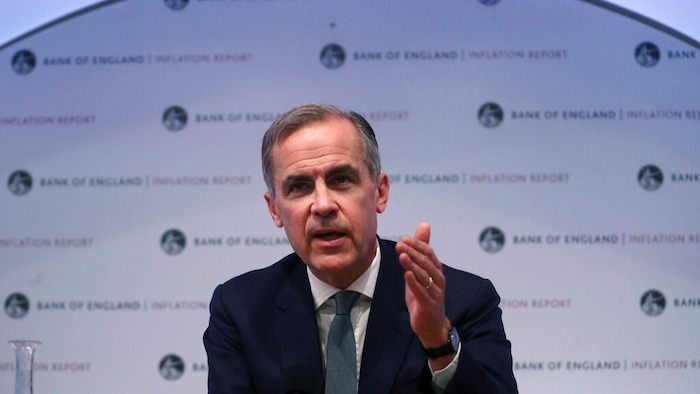 The Governor of the Bank of England, Mark Carney speaks during a news conference to confirm the main interest rate will remain at 0.75 percent, at the Bank of England in London, Thursday Feb. 7, 2019. The Bank of England said that Brexit uncertainties and a weaker global economy overall, mean that British growth in 2019 is likely to be 1.2 percent.
Hannah McKay/Pool via AP

LONDON (AP) — The British economy is set to grow at its slowest rate since the global financial crisis a decade ago as the "fog of Brexit" causes heightened uncertainty, the Bank of England warned Thursday.

With Britain due to leave the European Union in just 50 days, the central bank said that questions over Brexit are weighing so much on the economy that there's a one-in-four chance it could slip into recession this year — even if a Brexit deal is reached.

Bank of England Governor Mark Carney said the "fog of Brexit" is weighing heavily on businesses' investment decisions, while households are starting to spend less.

"Given the dynamics of the negotiations, we are now assuming uncertainty remains elevated for a while and that financial conditions stay tighter for longer," he said in a press briefing after the bank's nine-member policy committee kept its main interest rate at 0.75 percent.

"Although many companies are stepping up their contingency planning, the economy as a whole is still not yet prepared for a no-deal, no-transition exit," he said.

The Bank of England said that the Brexit uncertainties and a weaker global economy overall mean that British growth this year is likely to be 1.2 percent. That's down sharply from the 1.7 percent predicted in November and below 2018's 1.4 percent. It would make for the worst year in Britain since a 4.2 percent contraction in 2009.

The economy is slowing despite a modest boost from firms stockpiling as they prepare for a potential "no-deal" Brexit, which could lead to tariffs on exports to the EU and serious disruptions to the flow of goods.

Carney said that the possibility of a "no-deal" Brexit has gone up since the aftermath of the Brexit vote in 2016, when it was considered unlikely.

"It's a statement of the obvious," he said.

Britain is due to leave the EU on March 29 but last month the national parliament overwhelmingly rejected the deal that Prime Minister Theresa May had agreed on with the EU. She's in Brussels Thursday trying to eke out concessions from the EU, particularly on a controversial provision intended to make sure no hard border returns between EU member Ireland and Northern Ireland, which is part of the United Kingdom.

It's unclear she will be able to get any concessions and fears have grown in recent weeks that Britain could crash out of the EU without a deal, a worst-case scenario that the Bank of England has previously said could see the British economy shrink by 8 percent within months and house prices collapse by around a third.

While the Bank of England is not factoring in a "no-deal" Brexit in its forecasts, the uncertainty is already affecting the economy.

Firms have reined back investments and consumers appear more cautious. Firms are also building up inventories to prepare for potential disruption. In its own analysis of companies' preparations, the Bank of England found that around half of respondents had been building up stock levels or were planning to do so, with two thirds doing so in the manufacturing and consumer services sectors.

If Britain finalizes and approves a deal for a smooth Brexit transition, the British economy and household spending could get a boost, Carney said. The economy could grow by around 0.5 percentage point more over the coming three years.

And that could also put the Bank of England in a position to raise interest rates once again.

Though inflation is set to dip below the bank's 2 percent target over the coming months, that's expected to be temporary. Its forecasts suggest it would be poised to raise its main interest rate by a quarter of a percentage point this year.

But nothing's certain as long as Brexit remains unsolved, and Carney, in a humorous aside, explained how it's affecting him.