Auto demand had been forecast to weaken but the slump is sharper than expected. 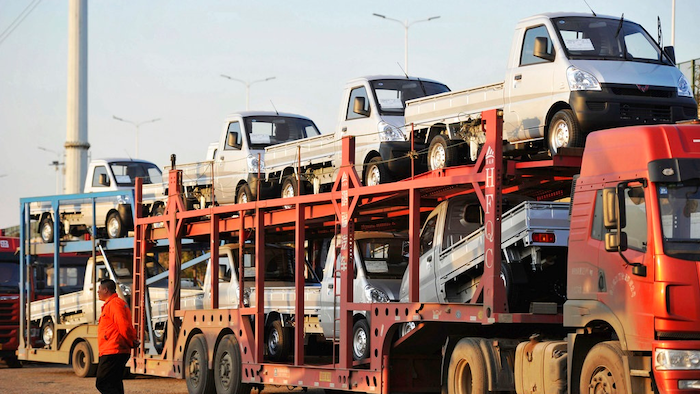 In this Oct. 31, 2018, photo, a staff members walks past a semi truck loaded with new vehicles in the parking lot for a local automaker in Qingdao in eastern China's Shandong province. China's auto sales sank for a fourth month in October, tumbling 13 percent from a year earlier and adding to an unexpectedly painful downturn for global automakers in their biggest market.
Chinatopix via AP

Purchases of SUVs, sedans and minivans contracted 13 percent from a year earlier to just over 2 million units, the China Association of Auto Manufacturers reported Friday.

Auto demand had been forecast to weaken after Beijing clamped down on bank lending late last year to cool a debt boom. But the slump is sharper than expected, prompting expectations regulators might try to prop up sales with tax cuts or other incentives.

The downturn comes at an awkward time for global and Chinese automakers that are spending heavily to meet government targets to develop and sell electric models.

It adds to challenges for communist leaders as they try to shore up cooling economic growth and fight a tariff war with President Donald Trump over Beijing's campaign for state-led creation of global champions in robotics and other technology industries.

Sales for the 10 months through October fell 1 percent from a year earlier to 19.3 million vehicles. That was well below forecasts of growth in mid-single digits after last year's anemic 1.4 percent expansion.

"The bad overall environment has played the biggest role," including a cooling economy and restrictions imposed by Chinese cities on car ownership to curb congestions and smog, said Zhang.

If economic conditions sour, "people will cut expenses by not buying a car," he said.

China is a top market for General Motors Co., Volkswagen AG and other industry majors that look to increasingly prosperous Chinese customers to drive revenue growth. They are spending billions of dollars to develop models to appeal to local tastes.

Total vehicle sales, including trucks and buses, shrank 11.7 percent in October to 2.4 million. For the year to date, they were off 0.1 percent at 22.9 million.

Automakers are rolling out dozens of electrics but depend on gasoline-powered models for their profits.

Chinese domestic brands that had been expanding their market share with lower-cost SUVs and sedans suffered an even bigger decline in October.

Year-to-date sales were off 3.6 percent at just under 8.1 million. Their total market share shrank 2.5 percentage points to 41.6 percent.