China's Exports to U.S. Tick Up as Traders Try to Beat Tariffs

Traders are rushing to beat a U.S. tariff hike planned for January, when a 10 percent charge is due to rise to 25 percent.

Joe McDonald
Containers are piled high at a port in Qingdao in eastern China's Shandong province Thursday, Nov. 8, 2018. Growth in Chinese exports to the United States ticked up in October as traders rushed to beat another round of tariff hikes.
Chinatopix via AP

BEIJING (AP) — Growth in Chinese exports to the United States ticked up in October as traders rushed to beat a new tariff hike in a battle over Beijing's technology policy.

Shipments to the United States, China's biggest market, have been unexpectedly resilient since Trump started imposing punitive tariffs on goods in July in a fight over Beijing's technology policy. Exports rose 13.3 percent in October over a year earlier to $42.7 billion, up from September's 13 percent growth, customs data showed Thursday.

China's trade surplus with the United States narrowed to $31.8 billion from September's record $34.1 billion as imports of American goods rose 8.5 percent to $10.9 billion.

Traders are rushing to beat a U.S. tariff hike planned for January, ING economist Iris Pang said in a report. Pang said they are pessimistic this month's planned meeting between Presidents Xi Jinping and Donald Trump in Argentina will yield positive results.

"We expect this front-loading behavior to continue for the rest of 2018," Pang said.

Beijing has responded with tariff hikes on $110 billion of American goods. Trump has threatened to expand U.S. penalties to all goods from China.

"While shipments to the U.S. held up well, those to other parts of the world grew even faster, suggesting that global demand is more resilient than expected," Louis Kuijs of Oxford Economics said in a report.

Unexpectedly strong imports contrasted with other signs that China's factory output and other economic activity is cooling.

In the quarter ending in September, economic growth slowed to 6.5 percent over a year earlier, down from the previous quarter's 6.7 percent. A government survey found factory activity in October fell to a two-year low.

Chinese leaders have cut tariffs on non-U.S. goods and promised to encourage imports of consumer goods but reject pressure to roll back plans for state-led development of technology industries.

Washington, Europe and other trading partners complain plans such as "Made in China 2025," which calls for creating Chinese global champions in artificial intelligence, robotics and other fields, violate Beijing's market-opening obligations.

Xi presided over the opening of an import fair Monday in Shanghai that is meant to rebrand China as a welcoming market for other countries' goods. Some 3,600 companies from 152 countries are taking part in the five-day event.

The president promised to open Chinese markets wider, to cut costs for importers and to increase consumer spending power. But he gave no response to foreign complaints about technology policy and investment barriers.

Beijing agreed in May to narrow its trade gap with the United States by purchasing more American soybeans, natural gas and other exports. But Chinese leaders scrapped that deal after Trump's first tariff hikes hit.

Chinese companies have been ordered to stop buying American soybeans — the biggest U.S. export to China — and find other suppliers and export markets.

China's exports to the 28-nation European Union in October rose 12 percent over a year ago to $35 billion. Imports of European goods increased 14.1 percent to $21.6 billion.

American demand for Chinese goods should weaken next year as tariff hikes bite, said ING's Pang. She said exporters might try to sell more to Europe or other Asian economies, but those markets also might be hurt by U.S. import controls. 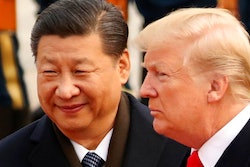 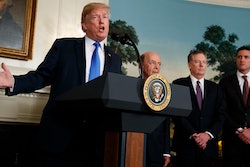 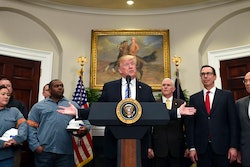