U.S. manufacturing is expanding at a solid pace. 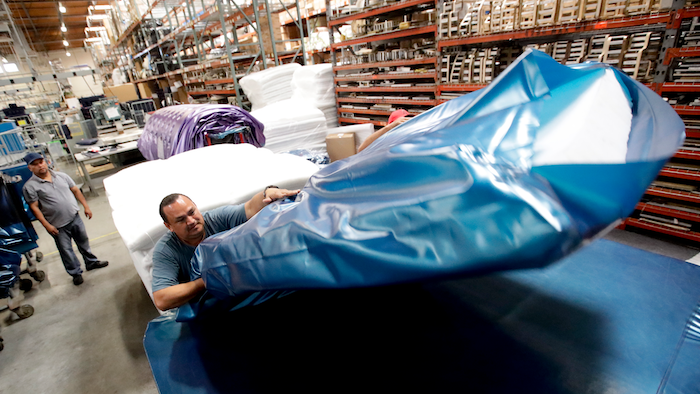 In this July 5, 2018, photo workers assemble the Afloat water mattresses at the factory in Corona, Calif. On Thursday, Sept. 27, the Commerce Department releases its August report on durable goods.
AP Photo/Chris Carlson

WASHINGTON (AP) — Orders for long-lasting U.S. factory goods rose at a healthy pace last month, though the increase was mostly driven by a surge in aircraft demand.

The Commerce Department said Thursday that orders increased 4.5 percent in August, the most in six months. Excluding aircraft, cars, and other transportation equipment, however, orders increased just 0.1 percent.

U.S. manufacturing is expanding at a solid pace, with orders up 9.2 percent year-to-date. Consumers are confident and spending more, and businesses have stepped up investment in machinery and equipment. Still, President Trump's trade battles with China, Europe, and Canada pose a risk in the coming months.

A category of orders that is a proxy for business investment fell 0.5 percent in August after two strong months. Such orders are up 7.4 percent this year.

Orders for metals such as steel and aluminum rose 0.9 percent, after two months of flat or declining demand. Some of that increase may reflect the higher prices that steel and aluminum makers can now command with the Trump administration's 25 percent tariffs tamping down imports.

Other measures of the factory sector also point to solid growth. A survey of purchasing managers found that factory activity expanded in September at its fastest pace in 14 years. Production soared and manufacturers added jobs at a faster pace.

And a measure of factory output tracked by the Federal Reserve rose 0.2 percent in August, led by a big increase in auto production.

The economy expanded at a 4.2 percent annual rate in the second quarter, according to a separate report released Thursday. That was the fastest pace in four years, lifted by a strong increase in consumer spending and healthy business investment in new buildings and software.