Two-thirds of American companies say they have suffered lost sales or lower profits due to tariff increases. 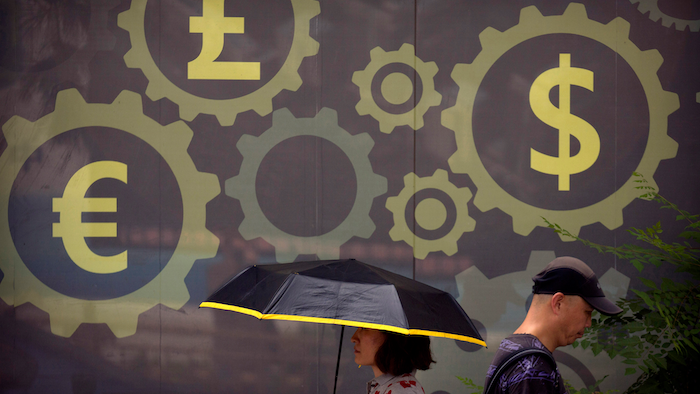 In this July 20, 2018 photo, people walk past a mural displaying world currency symbols on the outside of a bank in Beijing. Amid a worsening tariff battle, China is putting off accepting license applications from American companies in financial services and other industries until Washington makes progress toward a settlement.
AP Photo/Mark Schiefelbein

BEIJING (AP) — Washington has invited Beijing to hold new talks on their escalating tariff dispute, the Chinese foreign ministry said Thursday, ahead of a decision by President Donald Trump on whether to raise duties on $200 billion of Chinese imports. The announcement followed reports by American and European chambers of commerce that foreign companies in China have been hurt by earlier tariff hikes by both sides in the fight over Beijing's technology policy.

"We have indeed received an invitation from the U.S. side. We welcome it," said a ministry spokesman, Geng Shuang. "Now the two sides are in communication on relevant details." Envoys from the two countries last met August 22 in Washington but reported no progress.

Beijing has rejected pressure from the United States to roll back plans for state-led development of Chinese global champions in robotics, artificial intelligence and other fields. Washington, Europe and other trading partners say those plans violate China's market-opening commitments. American officials also worry they might erode U.S. industrial leadership.

The two governments have imposed 25 percent tariffs on $50 billion of each other's goods. Two-thirds of American companies that responded to a survey said they have suffered lost sales or lower profits due to that increase, two chambers of commerce reported Thursday.

More companies say they will suffer if Trump goes ahead with his planned tariff hike and Beijing retaliates, according to the American Chambers of Commerce in China and in Shanghai. In addition to retaliatory tariffs, companies report China is slowing down customs clearances and stepping up inspections and other bureaucratic processes, the chambers said.

Forecasters have warned that the worsening conflict between the world's two biggest traders could cut up to 0.5 percentage point off global economic growth through 2020 if all threatened tariff hikes go ahead. "American companies are suffering both from China's retaliatory tariffs, and — ironically — from U.S. tariffs designed to harm the Chinese economy," the two chambers said in a statement. "AmCham China and AmCham Shanghai urge both governments to return to the negotiating table."

Beijing has issued a list of $60 billion of American products for retaliation if Trump's next tariff hike goes ahead. The chairman of the American Chamber of Commerce in China warned the Trump administration might be underestimating China's resolve to fight back. "The U.S. administration runs the risk of a downward spiral of attack and counterattack, benefiting no one," William Zarit said in the statement.

To avoid the tariffs, 30 percent of U.S. companies are looking at moving assembly out of the United States or China or finding new suppliers, the chambers said. They said nearly one-third are thinking about canceling or postponing investment decisions.

Also Thursday, the European Union Chamber of Commerce in China said one in six of its members that responded to a survey are delaying investment or expansion. It said the conflict is "causing significant disruptions to global supply chains." China is running out of American imports for retaliation due to their lopsided trade balance, but threatened unspecified "comprehensive measures" in June. That prompted worries it would use regulatory controls to disrupt U.S. business operations in China.

Another business group, the U.S.-China Business Council, said this week Chinese officials told it they were postponing accepting license applications from American companies in financial services and other fields until relations improve. Some 63.6 percent of more than 430 companies that responded to the American chambers' survey said profits and customer demand have fallen due to the U.S. tariffs and 62.5 percent said the same about retaliatory Chinese tariffs.

About 74.3 percent said they would be affected if Washington's tariff increase on $200 billion of Chinese goods goes ahead. Some 67.6 percent said the same of China's planned retaliatory tariffs on $60 of American goods.

The survey was conducted between August 29 and September 5. Some 52.1 percent of companies said Chinese authorities are slowing customs clearances, increasing inspections or imposing other "qualitative measures."

The European chamber said about five percent of companies reported shifting production out of the United States and about 7 percent were moving out of China. That shows "neither side is 'winning,'" because "both are equally prone to losing companies," the chamber said.

China has tried without success to recruit Germany, France, South Korea and other governments as allies against Washington. Some of them have criticized Trump's tactics but many echo U.S. complaints about Chinese market barriers and industrial strategy. "We share the concerns of the U.S. regarding China's trade and investment practices, but continuing along the path of tariff escalation is extremely dangerous," the European chamber president, Mats Harborn, said in a statement.