Business groups and members of Congress are already demanding that Canada remain in the regional trade agreement. 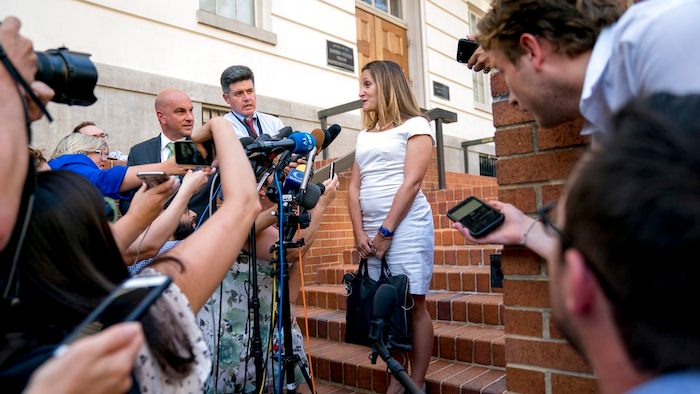 Canadian Foreign Affairs Minister Chrystia Freeland speaks to members of the media as she arrives at the Office Of The United States Trade Representative, Tuesday, Aug. 28, 2018, in Washington. Canada, America's longtime ally and No. 2 trading partner, was left out of a proposed deal Trump just reached with Mexico and is scrambling to keep its place in the regional free-trade bloc — and fend off the threat of U.S. taxes on its vehicles.
AP Photo/Andrew Harnik

WASHINGTON (AP) — President Donald Trump's drive to revamp the North American Free Trade Agreement has taken an unexpected turn — one that complicates his effort to replace that deal with one more favorable to American workers.

Canada, America's longtime ally and No. 2 trading partner, was left out of a proposed deal Trump just reached with Mexico and is scrambling to keep its place in the regional free-trade bloc — and fend off the threat of U.S. taxes on its vehicles.

By contrast, Mexico, long the target of Trump's ire, has cut a preliminary deal with the United States to replace NAFTA with a pact that's meant, among other things, to shift more manufacturing into the United States.

In announcing the deal Monday, Trump said he wanted to call it the "United States-Mexico Trade Agreement," pointedly omitting Canada.

Freeland said the two had "a very good, constructive conversation" about how to revamp NAFTA. The two sides will begin delving into specific issues Wednesday morning.

Lighthizer intends to formally notify Congress of the deal with Mexico on Friday. This would begin a 90-day countdown that would allow Mexico's outgoing president, Enrique Pena Nieto, to sign the new pact before leaving office Dec. 1. Otherwise, President-elect Andres Manuel Lopez Obrador might want to reopen the negotiations and further complicate the prospects for a new agreement.

To intensify the pressure on Canada, Trump threatened Monday to slap taxes on Canadian auto imports. As a result, said Philip Levy, a senior fellow at the Chicago Council on Global affairs and a White House trade adviser in the administration of President George W. Bush, Freeland is negotiating "under threat of auto tariffs or the demolition of NAFTA."

The Trump administration says the deadline isn't as tight as it seems. After notifying Congress of the new trade pact, it has 30 days to make public a copy of the full text.

"That means they have wriggle room" to fine-tune the details and squeeze Canada into a reimagined North American trade bloc, Levy said.

"Our objective is to get Canada on board quickly," Mnuchin told CNBC. "I don't anticipate there is going to be a lot of sticking points."

Business groups and members of Congress are already demanding that Canada remain in the regional trade agreement.

When the Trump administration notified Congress last year that it intended to renegotiate NAFTA, critics note that administration said it would begin talks with both Canada and Mexico. It's unclear whether the Trump team even has authority to reach a pact with just one of those countries. And Congress, which has to approve any NAFTA rewrite, might refuse to endorse a deal that excludes Canada.

"I don't think we've seen something like this before," said Stephen Orava, a trade lawyer who is a partner at the King & Spalding firm. "The path, both legally and politically, is a lot more complicated and has a lot more land mines."

After taking effect in 1994, NAFTA tore down most trade barriers among the United States, Canada and Mexico. Trade within the bloc soared. But many manufacturers moved plants south of the border to capitalize on low-wage Mexican labor and then shipped goods back to the United States.

During the presidential campaign, Trump railed about the manufacturing jobs lost to Mexico and about the U.S. trade deficit with its southern neighbor: $69 billion last year.

This week's trade pact is meant to change the ground rules and return some manufacturing to the United States. Among other things, the U.S.-Mexico deal requires that 40 to 45 percent of car be made in a country with auto wages of at least $16 an hour in order to qualify for duty-free status. Mexican auto workers now earn an average of just over $5 an hour, Americans nearly $22 an hour.

So if Mexico was the problem in Trump's view, how did Canada find itself in the crosshairs?

Canada, after all, is one of the few major economies that buy more goods and services from the United States than they sell. (The U.S. last year recorded a narrow trade surplus with Canada of nearly $3 billion.)

And having fought as allies in conflicts from World War I to Afghanistan, the two neighbors are so close that the creators of television's "South Park" built an entire movie comedy around the laughable premise that they'd go to war with each other.

But flashpoints remained. The two countries have battled over U.S. charges that Canada dumps subsidized lumber in the American market and uses big tariffs to protect its dairy farmers — topics likely to arise during Freeland's visit.

In Trump's bombastic approach to policymaking, "you need a villain or some drama, and that villain is Canada," said Laura Dawson, director of the Canada Institute at the Wilson Center think tank.

"We're not going to stand for that," he said, neglecting to note that the United States imposes huge tariffs of its own: 350 percent on tobacco imports, for instance, and 164 percent on peanuts.

In fact, tariffs aren't really a big issue between the United States and Canada: NAFTA eliminated most of them.

In some ways, the rift between the United States and Canada seems personal. Trump was enraged when Prime Minister Justin Trudeau said in a news conference after a contentious Group of Seven summit in June that he wouldn't let Canada be pushed around by Washington.

Trump's trade adviser Peter Navarro upped the ante by saying there was a "special place in hell" for Trudeau — a comment Navarro later said he regretted.

Canada also seemed far less willing than Mexico to accept the kind of NAFTA rewrite that Trump was demanding.

"Canada was happy with the status quo," said Christopher Sands, director of Johns Hopkins University's Center for Canadian Studies. Mexico, by contrast, "is keenly aware that NAFTA is their ticket out of developing country status ... They wanted to do what it took to keep a deal. They were all about making a deal happen."

The U.S. and Canada announced no breakthroughs Tuesday. But trade attorney Orava said: "There's room for flexibility on all sides."

But he conceded, "It's going to be a very intense few days."