The country's largest business group said it would work to rally support for NAFTA. 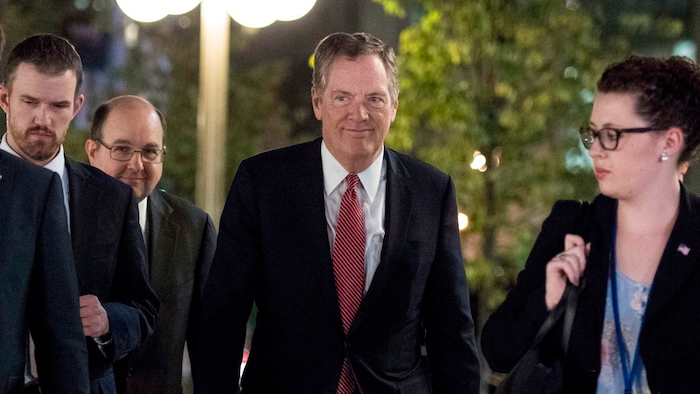 United States Trade Representative Robert Lighthizer arrives for a dinner at the National Arts Centre, during the third round of NAFTA negotiations in Ottawa, Ontario on Tuesday, Sept. 26, 2017.
Justin Tang/The Canadian Press via AP

WASHINGTON (AP) — America's biggest business group is warning the Trump administration that a withdrawal from the North American Free Trade Agreement would be a "political and economic debacle" that would cost hundreds of thousands of U.S. jobs.

Talking with reporters Friday, John Murphy, a senior official with the U.S. Chamber of Commerce, said the chamber would work to rally support for the trade deal and against the administration's hardline demand for concessions from Canada and Mexico. The comments were unusually blunt for America's biggest business group.

The Trump administration, which has threatened to pull out of NAFTA if the three countries can't agree on far-reaching changes to favor American interests, quickly returned fire.

"The president has been clear that NAFTA has been a disaster for many Americans, and achieving his objectives requires substantial change," said Emily Davis, spokeswoman for the Office of the U.S. Trade Representative. "These changes of course will be opposed by entrenched Washington lobbyists and trade associations. We have always understood that draining the swamp would be controversial in Washington."

The fourth round of talks to overhaul NAFTA, which was enacted 23 years ago, is scheduled for next week in Washington.

NAFTA erased most trade barriers along the United States, Canada and Mexico and led to an explosion in trade between the three countries. U.S. farm exports soared. U.S. manufacturers moved production — and jobs — south of the border to capitalize on lower Mexican wages. In doing so, they built complicated supply chains that crossed NAFTA borders.

Before the renegotiation began in August, many business and farm groups hoped the Trump administration would settle for tweaking rather than abandoning the trade deal — updating it, for example, to reflect the rise of e-commerce. But U.S. Trade Rep. Robert Lighthizer declared at the outset that the U.S. wouldn't be satisfied with minor changes.

Instead, the administration has been seeking to ensure that more auto production be made in America to receive NAFTA benefits, that more government contracts go to U.S. companies and that NAFTA expire unless the countries agreed every few years to extend it. It also wants to scrap a dispute-resolution process favored by Canada.

"We are increasingly concerned about the state of play," he said.

The first three rounds of talks dealt mostly issues that weren't in dispute. But Round 4 is expected to move into tougher territory.

"They've worked through things that were mostly agreed upon," said David Salmonsen, senior director of congressional relations at the American Farm Bureau Federation, trade group for U.S. agriculture. "Now we're getting to the contentious issues."

Robert Zoellick, a former U.S. trade rep, this week told a conference at the Atlantic Council in Washington that he thought Trump might turn to brinkmanship over NAFTA to distract attention from other problems.

"There's a very serious risk, depending on what happens with Trump's popularity and the investigations, that at some point he'll withdraw from the agreement."

The president had vilified NAFTA on the campaign trail as a job-killing disaster, especially for U.S. factory workers who, Trump argued, had been the victims of U.S. companies moving jobs to Mexico. Trump threatened to pull out of pact in April before talks even started but reversed himself after pushback from American businesses, especially farm groups.

If the United States left NAFTA, trade barriers to Canada and Mexico would pop back up. Some of the tariffs would not be especially high. But Mexican tariffs on many American farm products could soar.

Lori Wallach, a NAFTA critic who is director of Public Citizen's Global Trade Watch, said business groups have been slow to realize that Trump was serious about leaving NAFTA if he couldn't negotiate a more favorable deal for American workers.

"They are going to have to decide, after they get done hyperventilating, whether they want something or nothing," Wallach said. "The status quo is not one of the choices."