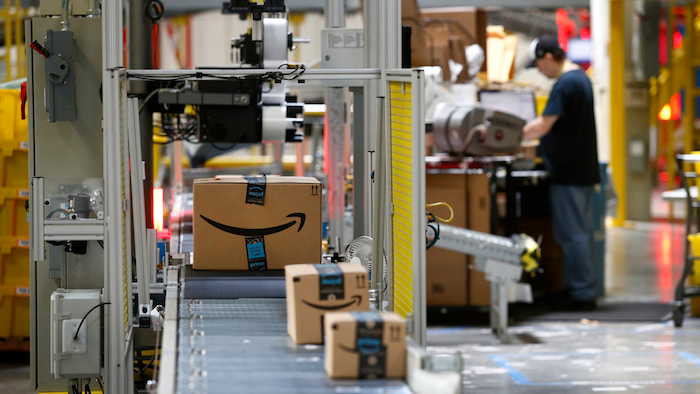 In this Aug. 3, 2017, file photo, packages pass through a scanner at an Amazon fulfillment center in Baltimore. Amazon is paying workers to defend the company on Twitter, reassuring critics that they make enough money to live and are allowed to take bathroom breaks. The tweets are part of Amazon’s plan to combat negative headlines and online chatter about poor working conditions at its warehouses.
AP Photo/Patrick Semansky, File

NEW YORK (AP) — Amazon is taking an out-of-the box approach to answering its critics — paying workers to be "ambassadors" and tweet full-time about how satisfied they were at their jobs.

One worker who Amazon says used to pack boxes at its warehouse in Jacksonville, Florida, tweeted about air circulation at the online retailer's warehouse being "very good." Plus, the worker whose account gives her name as Shauntrelle, says workers there get two 30-minute breaks during their 10-hour shifts, something she calls "a benefit."

Others on social media were skeptical of her cheery messages, calling her a bot. Shauntrelle responded to them, too, even with a misspelling: "We are totally noraml and not bots and we are totally happy working for an amazing company."

The tweets are part of Amazon's plan to fight back against negative headlines and online chatter about poor working conditions at its warehouses. Workplace experts say negative tweets can be a turnoff to potential employees who have more options during a strong economy. And Amazon will soon need to hire thousands of temporary warehouse workers to pack boxes during the hectic holiday shopping season.

"It's important that we do a good job of educating people about the actual environment inside our fulfillment centers," Amazon said.

The "ambassadors," as Amazon calls them, reassure critics that they are allowed to take bathroom breaks and that they make enough money to pay their bills. Some defend Jeff Bezos, Amazon's CEO and founder: "Mr. Bezos pays me a very comfortable wage," one of them wrote, responding to a tweet that compared Amazon's wages to Bezos' billions.

Amazon did not say how many workers it has enlisted for its ambassador program. The company also didn't respond to a request to interview them, but did say the ones quoted in this story are genuine.

The Twitter accounts all look alike: They were created in August and have Amazon's smile logo at the top of their pages; some have fewer than 20 followers. They clearly state that they are ambassadors for Amazon, but list only their first names. The Associated Press could not verify their names or reach them. Amazon says its ambassadors are not scripted or told what to write.

Amazon has good reason to try to clean up its online reputation. The job market is strong, making it harder to find people to work in its warehouses. Potential employees search Twitter to learn about companies, says David Lewis, CEO of human resources consultancy OperationsInc, and positive messages could "mitigate the sting or bite" of negative ones.

Some of Amazon's cleanup crew target a loud foe of the company: U.S. Senator Bernie Sanders. His Twitter account, which has nearly 9 million followers, frequently points out the disparity between Amazon's median employee pay and Bezos' vast fortune. When one Twitter user responded to Sanders by suggesting that Amazon employees organize a union, an Amazon ambassador responded : "The only thing I need to organize is my closet."

Sanders, in an emailed statement, said, "If Amazon actually paid all its workers a living wage and treated them with dignity, they would not have to pay dozens of people to tweet all day."

Pay at Amazon's warehouses varies by location, according to its job postings. Its starting pay is $10 an hour at a warehouse in Austin, Texas, and $13.50 an hour in Robbinsville, New Jersey. The median pay for an Amazon employee last year was $28,446, according to government filings, which includes full-time, part-time and temporary workers. In comparison, Bezos' total compensation was nearly $1.7 million. (Most of Bezos' wealth is tied to Amazon.com Inc.'s stock price: His 16 percent stake in the company is worth more than $150 billion.)

"As an Amazon employee, I can tell you that I would never feel resentful about Mr. Bezos," one "ambassador" wrote on Twitter about the disparity.

It's not just tweets — the ambassadors also want critics to see Amazon's warehouses for themselves. They post links to warehouse tours that the company has offered for a few years.

"See if you can take a tour," Shauntrelle the ambassador tweeted to one user. "And then you may have a different opinion about the "famously hideous" amazon that you speak of."