Core prices, which exclude the volatile food and energy categories, rose 0.2 percent in June and 2.3 percent from a year earlier. 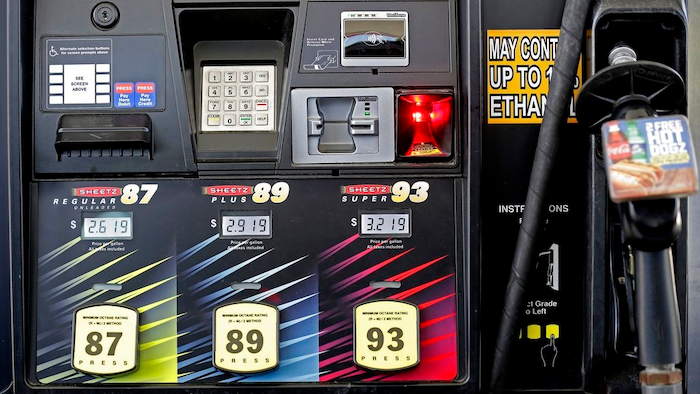 In this June 14, 2018, file photo gasoline prices are displayed on a pump at Sheetz along the Interstate 85 and 40 corridor near Burlington, N.C. On Thursday, July 12, the Labor Department reports on U.S. consumer prices for June.
AP Photo/Gerry Broome, File

WASHINGTON (AP) — Consumer prices rose in June from a year earlier at the fastest pace in more than six years, lifted by more expensive gas, car insurance, and higher rent.

Solid economic growth and supply bottlenecks have pushed inflation past the Federal Reserve's 2 percent target, after price gains had languished below that level for six years. That is a key reason that Fed officials expect to raise short-term rates twice more this year.

Price gains may intensify if President Donald Trump makes good on his threat Tuesday to slap tariffs on $200 billion of Chinese goods, including furniture, hats, and handbags. If implemented, those duties, combined with tariffs put in place last week, would mean about half of China's imports would be subject to extra duties, likely boosting costs for consumers.

Andrew Hunter, an economist at Capital Economics, said overall inflation may decline in the coming months as the recent gas price spikes level off. Prices at the pump averaged $2.88 a gallon nationwide Thursday, down 3 cents from mid-June.

"Nonetheless, with the labor market exceptionally tight and activity expanding strongly, we think that core inflation has further to rise," Hunter said in a research note. "The prospect of further tariffs on Chinese imports will only add to that upward pressure."

Household appliance prices rose in June from a year earlier at the fastest pace in five years, Hunter noted, lifted by a 13 percent increase in washing machine costs. Trump imposed tariffs on washing machines in January.

The Fed's preferred inflation gauge has increased at a slower pace, up 2.3 percent in the past year. But most economists expect the Fed will raise rates a total of four times this year as it attempts to keep inflation in check without cutting off growth.

With consumers and businesses spending more, trucking firms have struggled to hire enough workers to keep goods moving. That has boosted shipping prices, lifting costs for businesses that may soon be passed on to consumers.

In June, gas prices increased 0.5 percent and have soared 24.3 percent in the past 12 months. That has sent prices at the pump toward nearly $3 a gallon, sucking more money from consumers' wallets and offsetting roughly a third of the benefit from last year's tax cuts.

Fuel oil has surged nearly 31 percent in the past year, pressuring airlines. Delta cut its full-year profit outlook Thursday, citing a $2 billion surge in fuel prices. Airlines have tried to offset rising fuel costs in a number of ways, including additional charges for passengers like bag fees.

Rents rose 0.3 percent in June and overall housing costs have increased 3.4 percent in the past year. Auto insurance prices also increased 0.3 percent last month and have jumped 7.6 percent from a year earlier.