NEW YORK (AP) — Gas prices hit a high for the year on Labor Day as refineries work to recover after Harvey.

As of Monday, the nationwide average for a gallon of gas was averaged $2.638, according to the AAA. That's up from $2.45 on Thursday.

Gas prices are expected to decline by mid- to late September because early reports do not show significant damage to refineries in Corpus Christi and Houston, AAA spokeswoman Jeanette Casselano said in a statement Thursday.

The Energy Department said Monday that eight refineries are beginning the process of restarting after being shut down, while four refineries in the Gulf are operating at reduced rates.

Phillips 66 said Monday that hundreds of workers were at its Sweeney Refinery assessing the damage and repairing equipment. It said its Lake Charles and Alliance refineries continue to operate, as do the Beaumont and Freeport terminals.

Exxon Mobil said Sunday it's making progress on restarting its Baytown refinery and chemical plant, which was spared significant damage from Harvey. The company's Beaumont refinery is flooded and remained shut. 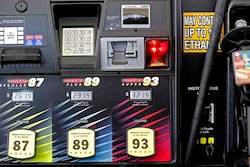