New Round of Proposed Tariffs Would Hit U.S. Consumers

"Consumers will feel it and perhaps as early as Christmas," said Mary Lovely, an economics professor at Syracuse University who studies trade. 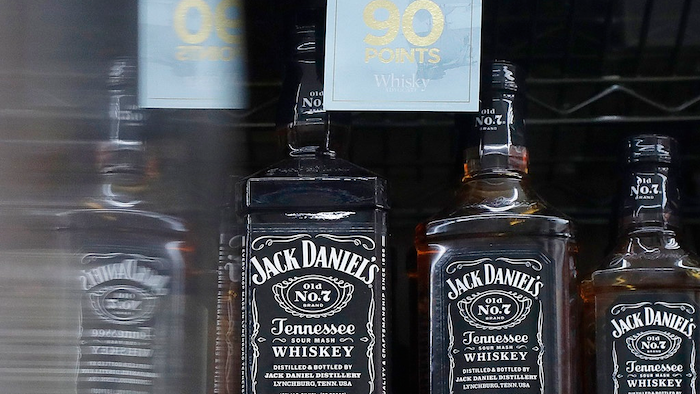 This July 9, 2018 photo shows bottles of Jack Daniel's whiskey displayed at Rossi's Deli in San Francisco. China's government vowed Wednesday, July 11, to take "firm and forceful measures" as the U.S. threatened to expand tariffs to thousands of Chinese imports. After the U.S. imposed 25 percent tariffs on $34 billion worth of Chinese goods, China retaliated by imposing tariffs on the same amount of U.S. products including whiskey.
AP Photo/Jeff Chiu

WASHINGTON (AP) — Now consumers are in the cross-hairs.

Americans could soon find themselves paying more for goods they might not have known were imported from China. It's a potential consequence of a new round of tariffs the Trump administration is proposing to slap on Chinese imports as soon as September.

And it marks a new phase in the U.S. trade war with China. Before now, the administration had deliberately avoided imposing tariffs on consumer goods in order to spare U.S. shoppers from direct economic pain. But late Tuesday, when the administration issued a list of 6,000 products worth $200 billion that it proposes to hit with 10 percent tariffs, it included consumer items ranging from baseball gloves to seafood, vacuum cleaners, toilet paper and burglar alarms.

The administration will hold hearings on the proposed list late next month. President Donald Trump is threatening to impose the tariffs in retaliation for duties that China slapped on $34 billion of U.S. goods on Friday. Those duties, in turn, were a response to new tariffs the United States had imposed on China.

If China were to back down, the Trump administration might hold off on the newest tariffs. But economists say Beijing is unlikely to do so.

"Consumers will feel it and perhaps as early as Christmas," said Mary Lovely, an economics professor at Syracuse University who studies trade.

On Friday, the administration imposed 25 percent tariffs on $34 billion of Chinese imports. Consumer goods made up only about 1 percent of that amount.

But Tuesday's list includes food and agricultural products, handbags, hats and furniture — a group of items that, by themselves, account for nearly one-quarter of the $200 billion in Chinese goods that would be subject to the new proposed tariffs, according to data compiled by trade research firm Panjiva.

Other products that would be affected include window-mounted air conditioners, Christmas lights, car parts, refrigerators and roughly $350 million of frozen tilapia filets, according to data from Panjiva. Of all the frozen tilapia the United States imports, roughly 83 percent comes from China.

The tariffs might even affect some of the "Make America Great Again" — or MAGA — hats sported by many of Trump's supporters. David Lassoff, a company manager for California-based Incredible Gifts, is stockpiling the hats because importers have told him that the MAGA hats might be affected by the tariffs. Incredible Gifts buys the hats from China and embroiders them in the United States.

Lassoff said he has tried to acquire the hats from American manufacturers, but customers are unwilling to pay more. Incredible Gifts sells the hats for $16.99 on Amazon.com; Lassoff said they might cost twice that if they were made in the United States. If the tariffs were imposed on Chinese-made hats, he said, he would consider acquiring them from another low-cost country like Vietnam.

For now, Lassoff is hoping that the big companies that sell them, like Walmart and Amazon, are lobbying against the tariffs.

So far, many Americans are enjoying a solid economy and haven't felt an impact from Trump's trade fights. Nor have there been noticeable political consequences, though some Republican senators have sharply criticized the administration's embrace of tariffs.

"Consumers are feeling good, but if they see prices start going up, there could be a backlash," said Rod Sides, U.S. leader of retail at Deloitte. "The average consumer hasn't yet internalized what the tariffs mean to them and haven't seen prices rise."

Economists are struggling to foresee any end in sight for the burgeoning trade dispute between the two largest economies. No high-level talks are being held, and none have been scheduled.

Trump "isn't giving people off-ramps through negotiations," said Rod Hunter, a trade lawyer at Baker McKenzie and a former trade official in the George W. Bush administration. "You have to allow your counterparty to find a graceful way to give you the outcome that you want."

Most economists say the direct effect on the U.S. economy will likely be small. Greg Daco, an economist at Oxford Economics, has calculated that the $250 billion in tariffs Trump has imposed or threatened to place on Chinese imports could shave growth by about 0.3 percentage point next year.

Still, the indirect effects could be greater, he said. Corporate executives may delay investment projects. And the stock market could retreat, thereby reducing Americans' wealth and ability to spend.

The trade fight "is a big risk to the economy, not least because we're only in the early stages of what could be a significant escalation," he said.

"Tariffs at the end of the day are a tax, and companies are going to have to figure out how they're going to pay that tax and it's mostly going to come through higher pricing, which is going to slow the economy down," Bergh said.

Stephen Holmes, a spokesman for the Home Depot, said some of the products on the list — like lumber and carpet — won't affect his company because it receives most of those from the U.S. and Canada. But other items, like hand tools, lamps or fans, could be affected.

He said that cost increases from tariffs are normally passed through to consumers — but not always directly. For example, Home Depot might spread the added tariff costs over several products so the Chinese-made product wouldn't necessarily absorb a big price increase.

These wouldn't be the first tariffs to affect the company. In January, the Trump administration imposed tariffs on foreign-made washing machines, which are sold by Home Depot. Holmes said the tariffs so far haven't reduced demand.