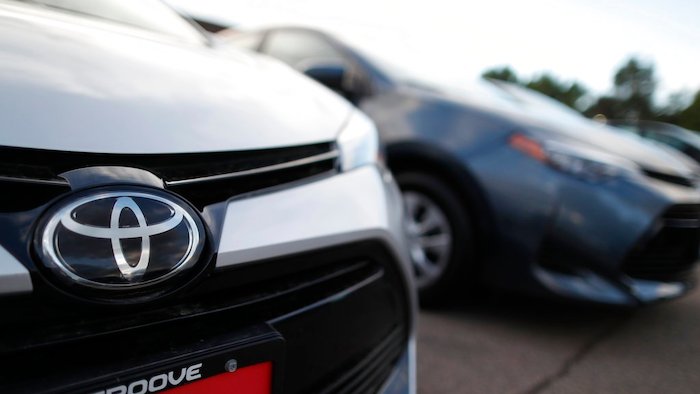 This Sunday, June 24, 2018 file photo shows the Toyota company logo on a car at a Toyota dealership in Englewood, Colo. Foreign automakers, American manufacturers and classic-car enthusiasts are coming out against President Donald Trump's plan to consider taxing imported cars, trucks and auto parts. Toyota Motor North America says the tariffs "would have a negative impact on all manufacturers, increasing the cost of imported vehicles as well as domestically produced vehicles that rely on imported parts." Friday, June 29, 2018 is the deadline for public comments on Trump's call for a Commerce investigation into whether auto imports pose enough of a threat to U.S. national security to justify tariffs.
AP Photo/David Zalubowski, File

General Motors warned in a filing Friday with the U.S. Commerce Department that the threat of auto tariffs "risks undermining GM's competitiveness against foreign auto producers" by driving up the cost of imported components and raises the risk that GM will face retaliation in other countries.

The National Association of Manufacturers said in its filing that that the tariff plan would "put the U.S. manufacturing sector at a global disadvantage, undermining growth and job creation throughout the United States."

And Toyota Motor North America said the tariffs "would have a negative impact on all manufacturers, increasing the cost of imported vehicles as well as domestically produced vehicles that rely on imported parts" — such as the company's Kentucky-built Camry.

The president has cited national security concerns as the reason for slapping tariffs on imported steel and aluminum, drawing retaliatory tariffs from the European Union, Mexico, Canada, Turkey and India.

Car collector Guy Mace of Springfield, Missouri, was one of many classic-car enthusiasts who wrote in to call for used cars and parts to be excluded from any tariff. "Antique and classic cars (have) nothing to do with national security," Mace wrote. "A wide ranging industry is involved the collection of antique and classic cars, and literally thousands of car enthusiasts, auction houses and repair/restoration shops derive their livelihood from this industry."

Commerce Secretary Wilbur Ross said the department had received 2,500 comments and expected more by Friday's deadline. "The purpose of the comment period and of the public hearing scheduled for July 19th and 20th is to make sure that all stakeholders' views are heard, both pro and con," Ross said in statement. "That will enable us to make our best informed recommendation to the President."