"We are considering manufacturing as many ball bearings as possible for the U.S. market before the imposition of tariffs," said one company. 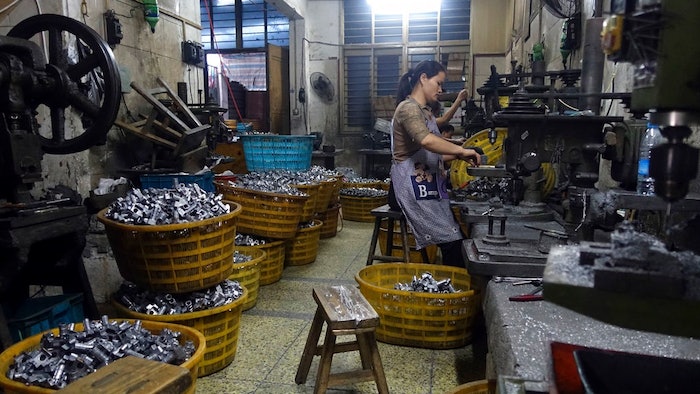 In this Wednesday, Oct. 21, 2015 file photo, a worker manufactures metal parts in an auto parts factory in Rui'an near Wenzhou city in eastern China's Zhejiang province. Chinese exporters of goods from electronics to motorcycle parts are scrambling to insulate themselves from U.S. President Donald Trump’s proposed tariff hike. They are weighing plans to rush shipments to American customers ahead of the increase, raise prices or find other markets. Some are looking at shipping goods through other countries to hide their Chinese origin.
AP Photo/Erika Kinetz, File

The company in the eastern city of Ningbo is among exporters of goods from motorcycle parts to electronics that are scrambling to cope with President Donald Trump's higher duties by shipping early, raising prices or finding new markets.

The 25 percent increase would turn Cixin's profits to losses in the U.S. market, which takes 30 percent of its exports, according to Wang Liqiang, a company manager.

"We are considering manufacturing as many ball bearings as possible for the U.S. market before the imposition of tariffs," said Wang. "We can do it by working overtime."

Some companies are looking at ways to hide their Chinese origin by shipping goods through other countries.

"Maybe customers will buy from South America, and then South America sells to the U.S.," said Yvonne Yuan, a sales manager for Shenzhen Tianya Lighting Co., a manufacturer of LED bulbs.

Trump says higher duties on $50 billion of Chinese goods are meant to punish Beijing for stealing or pressuring foreign companies to hand over foreign technology.

Trump left time to negotiate. A public comment period runs through May 11, with a hearing scheduled May 15.

Economists and Chinese officials say the tariff hike's overall impact on China should be limited. But for exporters that depend on the U.S. market, the potential costs are alarming.

Knock-on effects could greatly increase the impact, Moody's Investors Service researchers said in a report. It said that Chinese manufacturers that supply inputs to targeted sectors would see reduced demand and more pricing pressure, spreading the effects of tariffs deeper into the Chinese economy. Manufacturing and processing of metals and metal products, as the key input sectors for technology-product manufacturing, would be hurt the most.

Chinese exporters supply most of the world's mobile phones, personal computers, televisions, toys and other light manufactured goods from thousands of factories.

They are flexible and resourceful but many are struggling with higher costs and slowing demand. China's total exports last year rose 7.9 percent, down from the heady double-digit rates of the past decade.

The United States buys about 20 percent of China's exports. But Americans are especially important to exporters because they buy electronics and other high-value goods, including many targeted by Trump's tariffs.

Some exporters already are reeling from previous U.S. tariff increases of up to 500 percent on washing machines, solar modules and some metal products, meant to offset what the Trump administration says are improper subsidies that allow them to sell at unfairly low prices.

Others are confident American customers cannot do without them.

Makers of motorcycle components plan to use that leverage to ask buyers to split the cost if tariffs rise, said Pan Jianle, an official of the Motorcycle Parts Association in Wenzhou. She said they export worldwide but the United States is their No. 1 market.

"The U.S. motorcycle parts industry relies heavily on China," said Pan. "It is difficult for U.S. customers to find products with good quality and value for money from other places."

Such a politically charged conflict has left companies and local Chinese officials jumpy.

Pan declined to provide the value of exports of motorcycle components to the United States. A few hours later, the Wenzhou city government's foreign affairs office called AP to ask about its interviews.

Zibo's electronics exports to the United States last year totaled $1 billion, according to Li. That would mean if the tariff hike applied to all their sales, it could add $250 million to the cost.

If higher tariffs hit, "they will raise the price," said Li. "If the U.S. customers failed to accept it, they would stop exporting to the United States and turn to explore other markets."

Ningbo-based Cixin Group's margins in the United States are about 10 percent, which would be wiped out by a 25 percent tariff hike, said Wang. The company also exports to Europe and Latin America.

"We can't bear all the costs," he said. "We can try to increase our exports to other countries, but it is not easy to establish a long-term relationship with new customers."

How to Fight China's 'Pirates'