German vehicles could be priced out of the market. 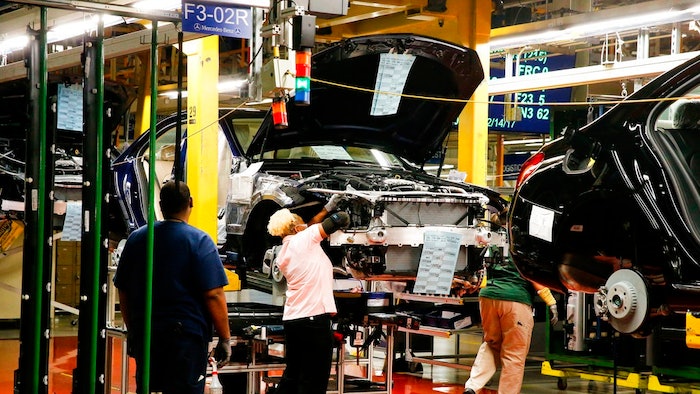 n this Feb. 14, 2017, file photo, employees do assembly and quality control work on automobiles at the Mercedes-Benz plant in Tuscaloosa, Ala. If a trade spat between the U.S. and China escalates and both countries raise tariffs, American automakers won’t suffer that much. But German luxury automakers BMW and Mercedes will. Mercedes ships up to 75,000 more from Tuscaloosa County.
Gary Cosby Jr./The Tuscaloosa News via AP, File

DETROIT (AP) — At the edge of the Blue Ridge Mountains sits a sprawling factory that has become an unlikely victim in the escalating trade fight between the U.S. and China.

The plant near Spartanburg, South Carolina, is owned by German automaker BMW, and it exports more vehicles to China than any other auto factory in America.

The 6 million-square-foot plant makes luxury sport utility vehicles, which are coveted by affluent Chinese buyers for their German prestige and reliability that's better than Chinese domestic brands. One in every four SUVs that comes off its assembly lines is shipped to China.

Now those 87,000 vehicles could be subject to extra tariffs that could add tens of thousands of Chinese yuan to their already lofty prices.

The trade dispute between the U.S. and China intensified last week, when the Trump administration released its list of imports from China worth $50 billion on which it would impose 25-percent tariffs as punishment for China's alleged theft of U.S. intellectual property. China retaliated with its own threatened tariffs on $50 billion worth of U.S. products, including autos.

In a move aimed at defusing the conflict, China President Xi Jinping on Tuesday indicated his country would make concessions, promising to cut auto import taxes and improve intellectual property protection but offering no specifics. China has promised similar changes in the past but has not followed through.

If both sides make good on tariff threats, German luxury automakers, rather than American companies, will be hit the hardest. American and Japanese automakers produce most of what they sell in China at factories located there.

In addition to BMW's South Carolina factory, a Mercedes plant in Tuscaloosa County, Alabama, ships as many as 75,000 pricey GLS and GLE SUVs to China.

Because the German vehicles — with leather seats, heated steering wheels, sunroofs and other goodies — command high prices in China, the current 25 percent tariff on autos shipped in from the U.S. doesn't seem that outrageous.

However, if the tariff doubles to 50 percent of the manufacturing cost as China has threatened, the German vehicles could be priced out of the market, forcing the companies to make them in China or elsewhere.

The U.S. isn't as restrictive about cars coming into the country. Currently, there is a 2.5 percent tariff on imported autos and 25 percent on imported pickup trucks. Trump is proposing to hit all auto imports with a 25 percent tariff. In addition, Trump last week threatened to add $100 billion more in tariffs if China retaliates against the U.S. It's not clear yet what products that would cover.

Realizing what's at stake, BMW put out a statement supporting free trade and warning that a conflict could hurt its factory, which exported 70 percent of the 371,000 SUVs it made last year to 123 countries. One third of the exports went to China.

"Free trade has made the success story of BMW Group in the U.S. possible," wrote Kenn Sparks, the company's chief U.S. spokesman. "In our opinion, a further escalation of the trade conflict between the U.S. and China would be harmful for all stakeholders."

The plant started off making cars when it opened more than 23 years ago at a time when the SUV was starting to catch on in the U.S. BMW quickly spotted the trend and began building one SUV there. It shifted the whole plant to sport utilities by 2008 as Americans and then much of the world began falling for the high seating and roomy cargo area.

When it opened in 1994 with an initial investment of $600 million, the plant had 2,000 workers, helping South Carolina diversify its employment from textiles to manufacturing. It now makes X3, X4, X5 and X6 SUVs there, growing into an economic powerhouse as BMW hired a total of 10,000 people and invested $8 billion. The factory also supports 40 parts supply companies in the state. One study found that the plant spurred more than 30,000 jobs in the state.

But Kristen Dziczek, a vice president at industry think tank Center for Automotive Research in Ann Arbor, Michigan, says a trade war with China could force BMW, Mercedes and others to rethink where they make vehicles, and that could cost jobs in the heart of Trump country. Spartanburg County, where the BMW plant is located, voted 63 percent for Trump in 2016.

BMW wouldn't comment on jobs. Before the tariffs were floated, it had plans to start producing the X3 compact SUV at a Chinese factory. Even so, Sparks says the Spartanburg plant will make more X3s than it does now because of high demand in the U.S.

Other auto producers that could suffer because of the tariffs threatened by China include Tesla, which a Barclay's analyst said gets about 12 percent of its revenue by exporting about 14,300 electric cars and SUVs from California to China. Ford also ships more than 50,000 vehicles, mostly from the luxury Lincoln brand, to China. But most of what it sells in China is made there in joint venture factories.

Ironically, the 25 percent tariff that the U.S. is contemplating against China could cost some U.S. automakers money.

At present, the U.S. is besting China in the auto export business. Companies shipped about 250,000 vehicles from the U.S. to China last year, and China sent about 25,000 to the U.S. But Dziczek says that is rapidly changing with more production headed to China.