The ministry said the Chinese styrene industry has been "substantially damaged" by dumping. 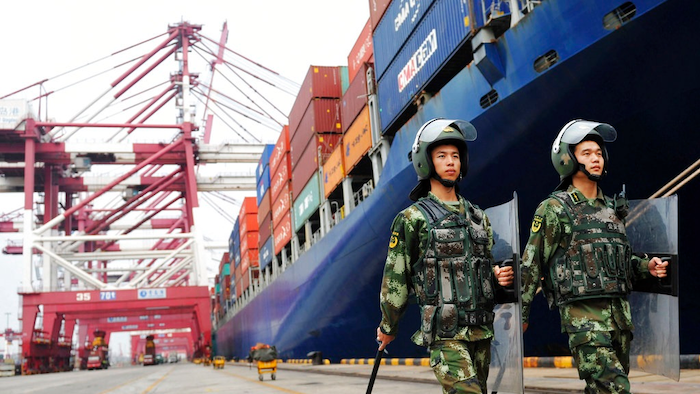 In this Sept. 8, 2016, file photo, paramilitary police patrol near a cargo ship at a port in Qingdao in eastern China's Shandong province. China imposed measures Tuesday, Feb. 13, 2018, against importers of a U.S. industrial chemical, requiring them to post deposits in preparation for possible anti-dumping duties amid rising trade tension with Washington.
Chinatopix via AP, File

A preliminary ruling by the Ministry of Commerce said styrene monomer from the United States, South Korea and Taiwan is being sold at prices 5 to 10.7 percent below the proper level. The chemical is widely used to make packaging and consumer products.

Importers must now pay cash deposits while the ministry completes its investigation.

The ministry said in its ruling the Chinese styrene industry has been "substantially damaged" by dumping, which occurs when manufacturers sell a product to another country at unusually low prices.

The decision follows U.S. President Donald Trump's approval last month of higher tariffs on Chinese-made solar equipment and washing machines that Washington said were sold at unfairly low costs. The Trump administration is also due to announce results of a probe into whether Beijing improperly pressures foreign companies to hand over technology, which could lead to further penalties.

Beijing's steady accumulation of multibillion-dollar trade surpluses with the U.S. — which widened January to $21.9 billion — has prompted demands for import controls.

Meanwhile, Chinese authorities have accused Trump of threatening the global trade regulation system by taking action under U.S. law instead of through the World Trade Organization. Beijing has filed a challenge in the WTO against Washington's latest trade measures.

It also launched an anti-dumping investigation of U.S. sorghum exports earlier this month.

Styrene monomer figures largely in foam and plastic packaging, as well as low-cost consumer products, which are central to China's booming e-commerce industry.