The company has a backlog of orders for more than 5,800 planes valued at $488 billion. 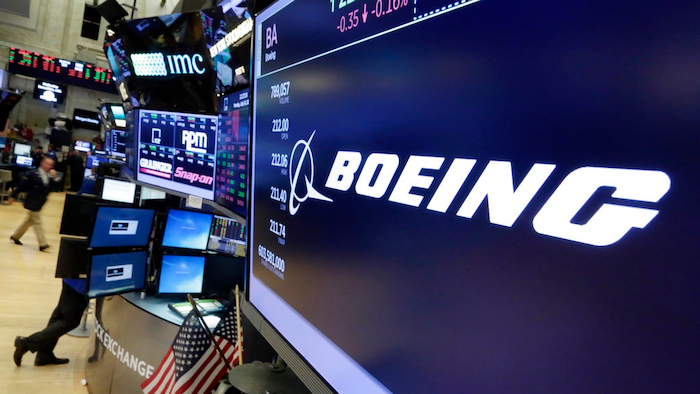 In this July 24, 2017 file photo, the Boeing logo appears above a trading post on the floor of the New York Stock Exchange. Boeing Co. on Wednesday, Jan. 31, 2018, reported fourth-quarter profit of $3.13 billion. The Chicago-based company said it had net income of $5.18 per share. Earnings, adjusted for pretax gains, came to $4.80 per share.
AP Photo/Richard Drew

DALLAS (AP) — As its core business of making airplanes hums along, Boeing is venturing into related activities like making aircraft seats while also attempting to snap up a smaller jet manufacturer.

On Wednesday, Boeing reported results for the fourth quarter of 2017 that topped Wall Street predictions, and it gave a stronger-than-expected forecast of profit and revenue in 2018.

Boeing delivered a record 763 airliners in 2017 and predicts that will rise to between 810 and 815 planes this year. It has a backlog of more than 5,800 planes valued at $488 billion, although that figure is based on list prices, and airlines usually get big discounts.

The company is speeding up production of its workhorse 737 and the 787 Dreamliner to take advantage of the hot market. It is also looking for new sources of growth.

Boeing has been talking to Embraer about a merger for weeks. Embraer's lineup of E-jets would help Boeing counter Airbus' new majority stake in Bombardier's C Series planes that have 100 to 150 seats and help it compete with small airliners from China. Brazil's government, however, has raised concerns about a foreign takeover of Embraer.

Boeing CEO Dennis Muilenburg said merger discussions have been "productive" but that Boeing's growth strategy doesn't depend on closing the deal.

Earlier in January, Boeing announced that it would team with auto-seat maker Adient to make seats for new and retrofitted airplanes, a market that is $4.5 billion and growing. At times, Boeing has been plagued by delays in deliveries from seat suppliers. Muilenburg said the company plans to use a mix of seats from the Adient joint venture and outside suppliers.

Meanwhile, Boeing continues to ponder another major undertaking — whether to design and build from scratch a new plane designed to fill the gap between the popular 737 and the larger two-aisle planes, the 777 and 787.

Muilenburg said Boeing is talking to 50 customers and won't be rushed into a decision, which is expected this year. When Boeing developed the 787, production problems put the program behind schedule and over budget, but the plane now attracts solid orders.

Although it has racked up a string of victories, Boeing suffered a defeat last week when a U.S. trade panel rejected the company's charge that it had been harmed by Bombardier. Boeing said the Canadian company was selling C Series jets at below cost.

Not only did Boeing lose the trade case, but it drove Bombardier into a tie-up with Airbus, strengthening Boeing's chief rival. Muilenburg said Boeing was waiting to learn details of the trade panel's decision before deciding on its next move.

Boeing's fourth-quarter profit nearly doubled from a year ago, to $3.13 billion, helped by record deliveries and recent tax legislation.

Stripping out certain items, the company said core earnings were $4.80 per share. That beat the $2.91 per share forecast from analysts surveyed by Zacks Investment Research.

Cai von Rumohr, an analyst for Cowen and Co., said investors should like the strong fourth-quarter results, the 2018 forecast, and progress in controlling costs for the 787 plane.