Potential Chinese retaliation might target areas such as U.S. exports of farm goods and aircraft. 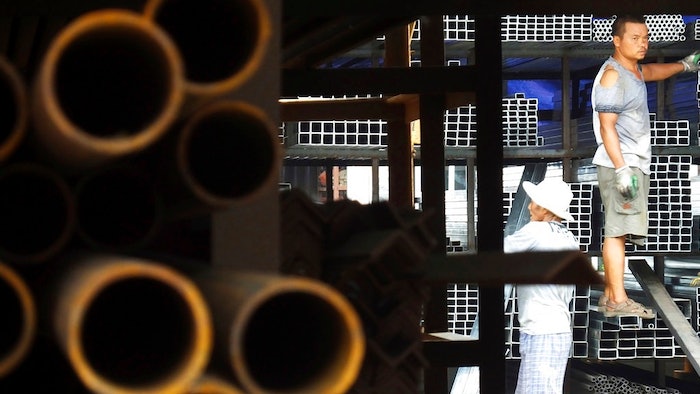 In this Monday, Aug. 1, 2016 file photo, laborers work at a steel market in Yichang in central China's Hubei province. The head of an American business group said Tuesday, Jan. 30, 2018 that Chinese officials have warned "there will be retaliation" if President Donald Trump launches trade remedies in disputes over technology, steel and other issues.
Chinatopix via AP, File

BEIJING (AP) — The head of an American business group said Tuesday that Chinese officials warned him "there will be retaliation" if President Donald Trump launches trade remedies in disputes over technology, steel and other issues.

The officials gave no details of what might trigger a response or what Beijing might do, said William Zarit, chairman of the American Chamber of Commerce in China. Speaking at a news conference, he didn't identify the officials and said they were talking about possible U.S. action broadly, not individual trade cases.

Trump has approved higher tariffs on Chinese aluminum, washing machines and other goods Washington says are dumped abroad at improperly low prices. U.S. authorities are investigating whether Beijing is harming American companies by pressuring them to hand over technology.

Zarit mentioned possible U.S. action on technology, steel and aluminum and said, "If that does go forward, I have been told by certain officials that yes, definitely, there will be retaliation."

Another chamber official, Lester Ross, said the group was told Washington is preparing to announce results of its technology investigation after Trump delivers his "State of the Union" speech to Congress this week.

Chinese officials have accused Trump of jeopardizing the global trading system by taking action under U.S. law instead of through the World Trade Organization.

Potential Chinese retaliation might target areas such as U.S. exports of farm goods and aircraft, said Ross. He said Beijing also could launch anti-dumping or other investigations of American goods.

Automakers and other foreign companies in China usually are required to operate through local partners. That requires them to share technology and other business secrets with potential Chinese competitors.

Despite that, the Chinese technology minister, speaking at a Cabinet news conference on Tuesday, rejected suggestions companies are forced to give up technology.

"Today in China, it is absolutely impossible to demand forced transfer of technology by a foreign enterprise," said Miao Wei. "Technology transfer follows the principle of voluntariness and market direction and is an independent choice made by the enterprise."

American companies want to avoid a trade war but believe dialogue with Beijing has done little to produce a "fairer relationship based on reciprocal treatment," said Zarit, the AmCham chairman.

"There is a sense that strictly just dialogue has not really brought much in terms of progress, so perhaps some pressure will help get us more progress to a more balanced economic commercial relationship," said Zarit.

"The membership does understand that there needs to be some changes made here," he said. "And to the extent that the changes will be the result of some pressure, then that's what will happen."

China Can Hit US with Sanctions Worth $3.6B