The changes tie payroll tax credits to the number of jobs Foxconn creates that pay between $30,000 and $100,000. They also call for terms that encourage hiring Wisconsin residents. 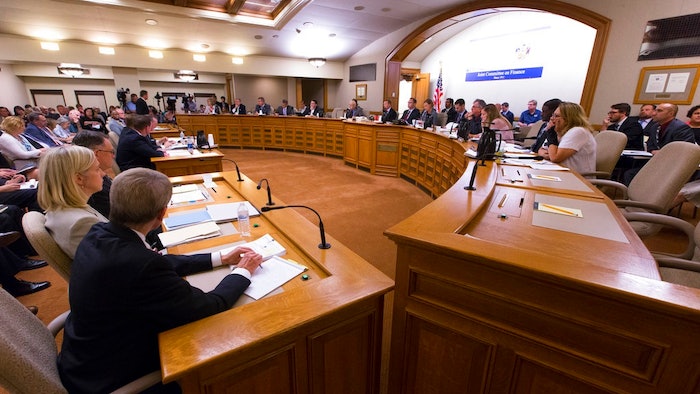 MADISON, Wis. (AP) — Wisconsin Republicans announced revisions Friday to a state incentives package for Foxconn, including provisions that would tie tax credits to the number of living-wage jobs created and encourage the company to hire Wisconsin residents.

The Taiwanese electronics giant plans to build a 20 million-square-foot plant in southeastern Wisconsin that the company says could eventually employ up to 13,000 people. Gov. Scott Walker has introduced a bill that would lay out $3 billion in tax credits for the company, exempt the plant from a host of environmental regulations and borrow $252 million for interstate highway repairs around the plant.

Walker's fellow Republicans control both the state Senate and Assembly, but the two houses have spent the last two weeks at loggerheads over the bill. Assembly Speaker Robin Vos, who represents portions of Racine County where the plant could end up, has been pushing to pass the measure.

Senate Majority Leader Scott Fitzgerald has been more cautious, outlining a number of concerns about the plan. One of his main complaints has been that the bill doesn't lay out any deadlines for Foxconn to create jobs.

Vos released the new version of the bill on Friday afternoon. The changes tie payroll tax credits to the number of jobs Foxconn creates that pay between $30,000 and $100,000. They also call for state officials to include terms in any contract with the company that encourage hiring Wisconsin residents. Those revisions are designed to allay fears the jobs will be low-paying and could go to Illinois residents.

The new bill also calls for spending $20 million on worker training in the 2019-2021 biennium. Vos said that language will help create a pipeline of workers for both Foxconn and small businesses that lose employees to the massive plant.

The package retains provisions exempting plant construction materials from local sales taxes. Also still in the bill is a call to borrow the $252 million for road work and requiring a federal match before spending it. New language, though, would require the Legislature's budget-writing committee to sign off on any spending plan.

The Assembly's jobs committee plans to vote on the new bill Monday, with a full Assembly floor session to follow on Thursday. Passage would send the bill to the Senate.

Assembly Minority Leader Peter Barca, a Kenosha Democrat, issued a statement saying he was shocked Republicans would release a new version of the bill three days before the committee vote.

"It's clear that Republicans are trying to appear proactive without actually fixing the concerns that many people have with this bill," Barca said.

Fitzgerald has said he doesn't know if he has the votes to pass the bill in his chamber, drawing criticism from influential conservative radio talk show hosts worried he might blow the deal and drive Foxconn to another state.

On Thursday Fitzgerald emerged from a meeting with his members saying they'd made headway and he believes the budget committee could meet and pass the bill by the end of August.

The new bill doesn't contain any deadlines for creating jobs, though. Fitzgerald spokeswoman Myranda Tanck didn't immediately reply to an email seeking comment. Fitzgerald said Thursday that the deadlines didn't have to be in the bill and could be part of a contract the state signs with Foxconn to enact the legislation.

WI to Approve $3B for Foxconn