Giovanni Pamio is accused of being a leader in a conspiracy that has cost VW more than $20 billion in penalties and lawsuit settlements. 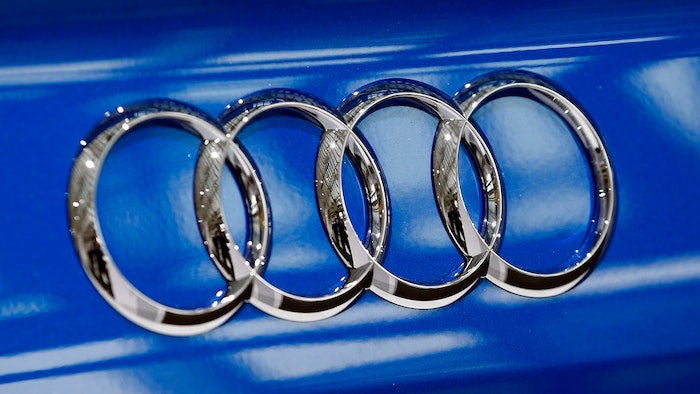 In this March 3, 2016 file photo the four ring logo of German car producer Audi is photographed during the annual press conference in Ingolstadt, Germany. A former high-level executive for Volkswagen’s Audi luxury brand has been charged with conspiracy and accused of directing other employees to program vehicles to cheat on emissions tests. The Justice Department says Giovanni Pamio, an Italian citizen, was charged Thursday, July 6, 2017, in a criminal complaint with conspiracy, wire fraud and violating the Clean Air Act.
AP Photo/Matthias Schrader, File

Giovanni Pamio, 60, an Italian citizen, is accused of being a leader in a conspiracy that was part of an embarrassing scandal that has cost VW more than $20 billion in criminal penalties and lawsuit settlements. He's the eighth ex-VW employee charged in the case that is being investigated by the FBI and the Environmental Protection Agency's criminal unit.

One of the employees is scheduled for sentencing later this month, another is in custody in the U.S. and five others are German citizens.

Volkswagen has admitted that VW, Porsche and Audi vehicles with 2-liter and 3-liter diesel engines were programmed to turn pollution controls on during government treadmill tests and turn them off while on the road. The scheme went on for years before being discovered in tests conducted by West Virginia University.

According to a criminal complaint filed Thursday in Detroit, Pamio is charged with conspiracy, wire fraud and violating the Clean Air Act. Gina Balaya, spokeswoman for the U.S. Attorney's Office in Detroit, said she could not comment on whether he is in custody.

The complaint says Pamio was head of Thermodynamics in Audi's Diesel Development Department in Neckarsulm, Germany, leading a team of engineers who designed emissions controls from 2006 through November of 2015.

He and other unidentified conspirators determined it was impossible to calibrate a 3-liter diesel engine to meet U.S. nitrogen oxide emissions standards within design constraints imposed by other VW departments. So Pamio "directed Audi employees to design and implement software functions to cheat the standard U.S. emissions tests," the U.S. Attorney's Office said in a statement.

Pamio and others then failed to disclose the software and knowingly misrepresented that the engines complied with U.S. pollution standards, according to the complaint.

In 2008, engineers who designed the cheating system sent a presentation to Audi senior management, including Pamio, that detailed it, according to the complaint. That year, several Audi managers concluded the software was "indefensible." An Audi manager in 2013 sent an email about discussing the system with U.S. regulators, but Pamio, the complaint stated, argued that disclosure would be "too risky!"

VW already has pleaded guilty to criminal charges and agreed to pay a $2.8 billion penalty.