Ford to Import Focus from China

The move to China will reportedly save the company $1 billion, including $500 million for canceling plans to build the Focus in Mexico.

Dee-Ann Durbin
In this file photo, Ford vehicles sit on the lot at a car dealership in Florida. Ford will export vehicles from China to the U.S. for the first time starting in 2019.
AP Photo/Chris O'Meara, File

DETROIT (AP) — Ford Motor Co. will export vehicles from China to the U.S. for the first time starting in 2019.

Ford said it plans to move production of its Ford Focus small car from the U.S. to China, where it already makes the Focus for Chinese buyers. Sales of small cars have dropped sharply in the U.S. and companies are seeking to cut costs making them. Ford's president of global operations Joe Hinrichs said the move to China will save the company $1 billion, including $500 million for canceling plans to build the Focus in Mexico.

Wary of the response from President Donald Trump, who has criticized Ford for making vehicles outside the U.S., Ford said the move won't cost U.S. jobs. The suburban Detroit plant that currently makes the Focus will be converted late next year to produce the Ford Ranger pickup and Ford Bronco SUV.

Hinrichs said Ford's research shows that customers — who are used to phones and other gadgets from China — care more about product quality than where their vehicles are made. Ford also said Tuesday that it plans to invest $900 million in its Kentucky Truck Plant in Louisville to make the new, aluminum-sided Ford Expedition and Lincoln Navigator SUVs.

Those vehicles will go on sale this fall and will be exported to more than 55 markets globally, the company said. The investment will secure 1,000 jobs at the Kentucky plant.

The Focus has been bounced around over the last few months as Ford tried to squeeze some profits from the ailing small car segment. U.S. Focus sales were down 20 percent through May, hurt by low gas prices and consumer preference for SUVs.

In January, the company announced it would cancel a new plant in Mexico and instead use capacity at another plant in Mexico to build the Focus. But over the last few months, Hinrichs said, Ford decided it could save another $500 million in tooling and other manufacturing costs if it moved production to China.

Hinrichs said last month's departure of former CEO Mark Fields had no bearing on the decision, which was in the works for some time. He also stated that Chinese wages are lower than wages in Mexico, although the cost to ship the vehicles erases some of that advantage. It's still cheaper to make cars for the U.S. in Mexico, he said, but Ford has extra capacity in China and the move frees up capital for the company immediately. 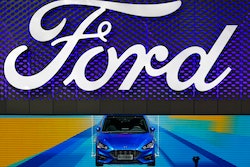