Debate Continues Over How Best to Dispose of Nuclear Waste

A new report says encasing much of the nuclear waste in a cement-like mixture instead of turning it into glass logs is a faster, less expensive disposal process. 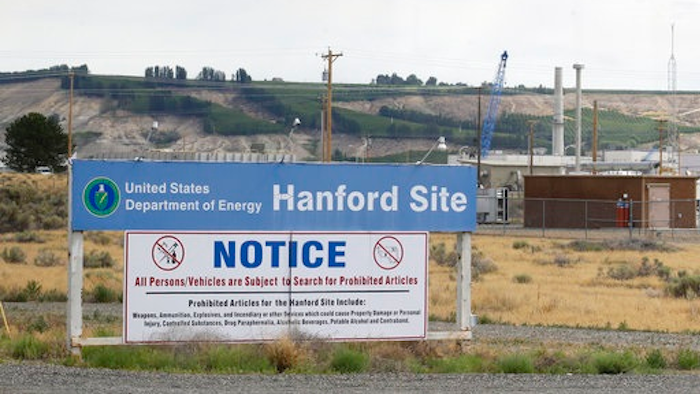 In this July 9, 2014, file photo, a sign informs visitors of prohibited items on the Hanford Nuclear Reservation near Richland, Wash. A new report says Congress should consider authorizing the Department of Energy to use grout to stabilize some of Hanford's radioactive waste, rather than a more expensive plan to turn it into glass.
AP Photo/Ted S. Warren, File

SPOKANE, Wash. (AP) — Congress should consider authorizing the U.S. Department of Energy to study encasing much of the nuclear waste at the nation's largest waste repository in a cement-like mixture instead of turning it into glass logs, according to a new report from the U.S. Government Accountability Office.

Doing so before burying the waste would be less expensive than a process called vitrification to turn the waste into the glass logs, said the report issued Wednesday.

The process called grouting might also allow waste at the Hanford Nuclear Reservation in a remote part of southcentral Washington state to be treated more quickly, the report said.

The waste is left over from plutonium production for nuclear weapons, including the bomb dropped on Nagasaki, Japan that led to the end of World War II.

The Energy Department replied that it agreed with the office's recommendations but Washington state officials still believe the best way to safely deal with the waste and protect the environment is by turning it into glass.

"We remain firm in our conviction that vitrification, or glass, is the superior process," said Alex Smith, manager for the state's Department of Ecology's Nuclear Waste Program.

There have been numerous delays in treating the waste stored in tanks at Hanford. Smith said state officials fear a study on a different way to deal with the waste could "redirect critical funding away from the ongoing work to get treatment processes up and running by 2023."

"We can't afford to get distracted from the job at hand," Cantwell said.

Hanford has about 56 million gallons (211 million liters) of waste stored in underground tanks until it can be treated for permanent disposal. Some tanks date back to World War II and are leaking.

Another 42 million gallons (159 million liters) of similar waste from nuclear weapons production is stored at the government's Savannah River Site in western South Carolina near Georgia.

The process to encase waste there in the cement-like mixture called grout has been used for small amounts of the waste.

Ground was broken at Hanford in 2002 for a $17 billion vitrification plant — one of the federal government's most expensive construction projects — to separate much of the waste into high-level and low-level radioactive material.

But the plant's construction has been halted by design and safety concerns. After the highly radioactive waste is immobilized in the glass logs, it would be shipped to a national repository proposed for Yucca Mountain in Nevada which has not been built.

The proposal to study cement-like encasement would only apply to waste with lower levels of radioactivity representing about 90 percent of the Hanford waste.

No tank waste has yet been treated at Hanford despite Energy Department spending of more than $19 billion, the report said.