It was set to close this year, but the Energy Department is considering keeping the $500 million plant that employs about 600 workers running. 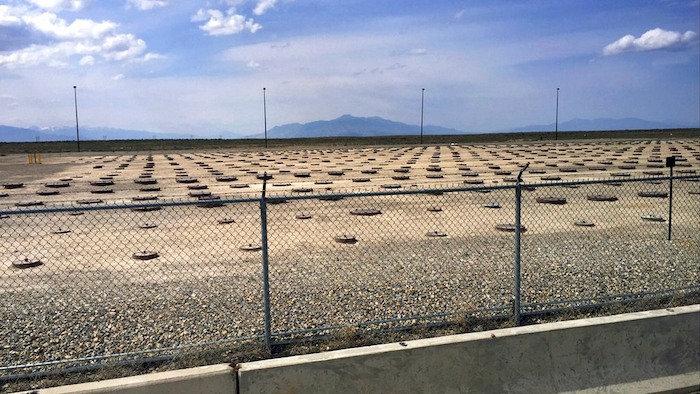 In this May 11, 2015, file photo, nuclear waste is stored in underground containers at the Idaho National Laboratory near Idaho Falls, Idaho. U.S. officials are considering extending the use of the eastern Idaho nuclear waste treatment facility beyond its scheduled closure this year so it can repackage radioactive waste brought in from other states before it's sent to a permanent disposal site in New Mexico.
AP Photo/Keith Ridler, File

BOISE, Idaho (AP) — U.S. officials are considering extending the use of an eastern Idaho nuclear waste treatment facility beyond its scheduled closure this year so it can repackage radioactive waste brought in from other states before it's sent to a permanent disposal site in New Mexico.

The U.S. Department of Energy's Advanced Mixed Waste Treatment Plant at a site that includes the Idaho National Laboratory was originally set to stop operating after it finished treating waste from Idaho this year.

But the Energy Department is considering keeping the $500 million plant that employs about 600 workers running.

"The department has been looking at where to take waste from other DOE sites and treat it," Energy Department spokesman Brad Bugger said last week. "Hanford has a very significant volume of waste that could be treated at Idaho."

The Idaho treatment plant handles transuranic waste that includes items like work clothing, rags, machine parts and tools that have been contaminated with plutonium, americium or other radioactive elements. The U.S. Nuclear Regulatory Commission says transuranic wastes take much longer to decay and are the most radioactive hazard in high-level waste after 1,000 years.

The Idaho treatment plant compacts the transuranic waste, making it easier to ship and put into long-term storage at the Waste Isolation Pilot Plant in New Mexico.

There's a catch in keeping the Idaho plant operating, though.

In 1995, following years of litigation amid concerns by state officials that Idaho was becoming a nuclear waste dump, the Energy Department signed an agreement with Idaho limiting how much nuclear waste can come into the state.

The agreement also requires that waste brought in from out of state be treated within six months of arriving and that it be shipped out within the following six months.

"I am open to the possibility of (Advanced Mixed Waste Treatment Plant) treating waste from other sites, so long as terms laid out in the 1995 Settlement Agreement are met," Idaho Attorney General Lawrence said in a statement to The Associated Press.

Bugger said the timeline in the settlement agreement could be a problem.

"If DOE made the decision to pursue this, we would have to sit down with the state and see if we can get some relief from the six-months-in, six-months-out," he said.

He said part of the problem is a backlog of shipments leaving Idaho due to a backlog of receiving them at the Waste Isolation Pilot Plant, which shut down for several years following a 2014 radiation release that contaminated part of that facility.

"Bringing Hanford's problems to Idaho is a terrible idea," she said. "The government's promise on when they're going to get it out is not worth very much if they don't have a place to send it."

Idaho is currently preventing spent nuclear fuel into the state for research at the Idaho National Laboratory, the nation's top research nuclear lab, because the Energy Department has broken the 1995 agreement by missing a deadline to clean up other nuclear waste.

Still, Wasden said he's "encouraged by recent discussions with DOE officials regarding clean up and future operations at INL."

The Idaho Cleanup Project Citizens Advisory Board, a federally-appointed, 12-member panel that makes recommendations to the Energy Department, has been unable to decide about making a recommendation on keeping the treatment plant running.

That group has called a special meeting to discuss the matter and possibly make a decision in a conference call on March 28 that will include an opportunity for public comments.