Kasich says he wants to change the image of Ohio "from the Rust Belt to the Knowledge Belt." 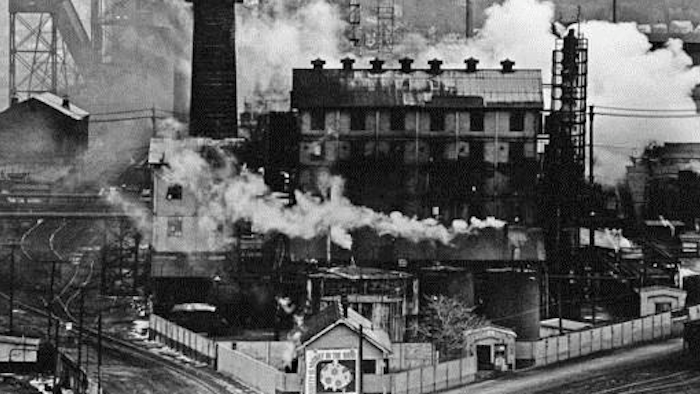 In this September 1980 file photo, a Jones and Laughlin Steel Corp. coke plant is wreathed in smoke and steam in Struthers, Ohio. Republican Ohio Gov. John Kasich has made it his mission to send Ohio's "Rust Belt" label to the scrap heap of history, but it's been repeated and entrenched over more than 30 years since the steel industry's devastation in the 1970s and 1980s by foreign competition and environmental regulation, leaving behind abandoned, rusting mills and unemployment.
AP Photo/Madeline Drexler, File

COLUMBUS, Ohio (AP) Ohio Gov. John Kasich has a pet peeve: the use of the term "Rust Belt" to describe his state.

The Republican governor has made it his mission to send the label to the scrap heap of history. He points to advances in such areas as drones, data analytics, biotechnology, robotics and autonomous vehicle research.

"We're a big manufacturing state. But we also want to change the image of Ohio into something from the Rust Belt to the Knowledge Belt," Kasich said during an Associated Press forum this month. "Now, this is hard."

Why is it hard? Because it's been repeated and entrenched over more than 30 years, including by President Donald Trump during last year's election, when he called Ohio and Pennsylvania places where "everything is rusting and rotting."

A look at the economics and politics of the debate:

Ohio's manufacturing roots date to the earliest days of its statehood. The first steel furnace west of the Alleghenies was built in Poland Township, near Youngstown, in 1802, according to the Ohio Steel Council. The region's readily accessible coal stoked steel-making furnaces and the region's steel, rubber and glass were shipped to nearby plants to make cars.

The industry was devastated by a combination of economic changes in the 1970s and 1980s, including foreign competition and strict environmental regulations. That left behind abandoned -- yes, rusting -- mills, unemployment and a fleeing working class. Ohio lost 405,000 manufacturing jobs between 1969, when employment at Ohio factories peaked, and 1983, according to data from the U.S. Bureau of Labor Statistics.

The sector settled in at around 1 million jobs for almost two decades after that. The sector began a pre-recessionary descent in the early 2000s before employment bottomed out at 614,000 in 2009. Advances and innovations are bringing the sector back, with 76,000 jobs added as of 2016.

One Rusty, and Persistent, Label

Democrat Walter Mondale helped invent the term Rust Belt during his 1984 presidential bid. Mondale attacked the economic policies of incumbent Republican President Ronald Reagan for "turning our great industrial Midwest and the industrial base of this country into a rust bowl," according to the Dictionary of American History. The media picked up on the concept and the Rust Belt label was born.

Kasich isn't the first to try to replace the name.

A recent "Trust Belt" movement by central U.S. business leaders pushes back against what they say is a media misrepresentation of the region's economic progress.

What's Past is Prologue

Marketing and economic development experts say the best way to shed Ohio's Rust Belt label would be to acknowledge and embrace the state's manufacturing legacy with a new image that it can live up to.

That's what Las Vegas did when it moved to replace its unwanted "Sin City" label with the slogan "What happens here, stays here," said Mike Diccicco, CEO of the Philadelphia-based brand communications agency DDCworks.

"If you took a look at it, you'd have to say the dominant theme of Las Vegas is one of adult freedom. It's not a place to take your family," he said.

"It's a part of our heritage, but it's not our future," Hill said.

"'Born into ruin' is what we say. They don't have the psychic baggage, they were not born in the heyday," he said. "And so this idea of resiliency, of struggle, of fighting for your land, of being proud of your land, but at the same time not having any illusions about what we were, that's been a whole new generation owning that term."

He said Kasich's promotion of Ohio's knowledge economy makes sense amid a climate where Trump is stoking the fears of blue-collar regions that elected him by painting a picture of "this Mad Max world."