Abe said that "a whopping majority" of the Japanese cars running on American roads are manufactured in the U.S. by American workers.

Associated Press
This combination file photo shows Donald Trump, right, stands on the 14th fairway during a pro-am round of the AT&T National golf tournament at Congressional Country Club in Bethesda, Md. on June 27, 2012, and Japanese Prime Minister Shinzo Abe, left, playing golf in Yamanakako village, west of Tokyo, on July 23, 2016. If they stick to schedule, Abe and Trump will spend more time on the fairway than at the White House. After facing off on some divisive issues in Washington on Friday, Feb. 10, 2017, they are jetting to Florida, where they will turn to something they have in common on Saturday: a love of golf.
AP Photo/Patrick Semansky, right, Kyodo News via AP, left, File

Japanese Prime Minister Shinzo Abe (SHEEN-zoh AH-bay) is making the case for Japanese business which he says supports some 840,000 jobs in the United States.

Abe was speaking at the U.S. Chamber of Commerce Friday ahead of a White House meeting with President Donald Trump.

Abe said that "a whopping majority" of the Japanese cars running on American roads are manufactured in the U.S. by American workers.

Abe said it was an honor to be meeting Trump less than a month after his inauguration, showing the "unwavering alliance" between the two countries. 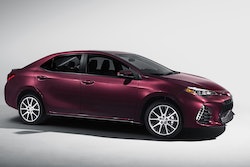