Foreign-made crafts, especially Chinese ones, have come to represent a big part of the market in the Holy Land, including Christmas souvenirs. 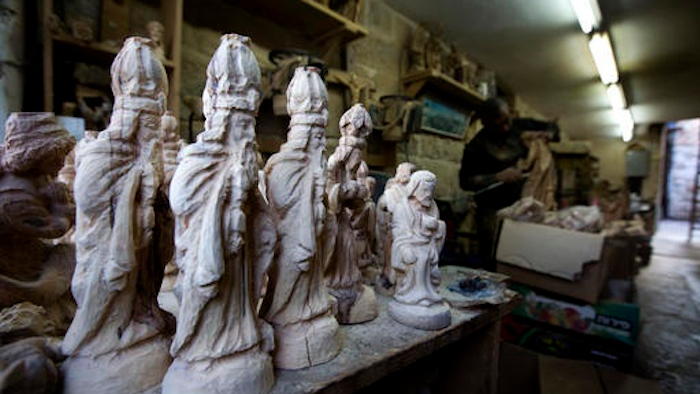 In this Monday, Dec. 12, 2016 photo, Palestinian woodcarver Muhammad Yusuf, works on olive wood figures in the West Bank city of Bethlehem. Christmas is approaching and pilgrims and tourists have begun to arrive, crowding the souvenir shops that line the narrow streets and allies of the city where Jesus is said to have been born. But when visitors choose to take a piece of the Holy Land back home with them, they better check the labels. Many souvenirs, including the West Bank town’s trademark rosemary beads, are imported from abroad, mainly China.
AP Photo/Majdi Mohammed

BETHLEHEM, West Bank (AP) — Christmas is approaching and pilgrims and tourists have begun to arrive, crowding the souvenir shops that line the narrow streets and alleys of Bethlehem, the biblical town revered as Jesus' birthplace.

But when visitors choose to take a piece of the Holy Land back home with them, they better check the labels. Many souvenirs — including the West Bank town's trademark rosary beads — are imported from abroad, mainly China.

A small number of souvenir shops are now trying to fight the trend, stocking their shelves almost exclusively with locally made products. Shopkeepers say that while their wares may be more expensive, the quality is much better and they give an important boost to the struggling economy.

"I've got nothing that is made overseas except for one thing, that's the magnets. It's something that sells for cheap and people want them," said Bassem Giacaman, owner of the Blessings Gift Shop and The Olive Wood Factory. "Everything else is made locally so I can keep the local economy working."

Some 120,000 people are expected to visit the Holy Land this holiday season, half of them Christian, according to Israel's Tourism Ministry.

Many will visit Bethlehem, where globalization has left its imprint like everywhere else. Foreign-made crafts, especially Chinese ones, have come to represent a big part of the market here, including Christmas souvenirs. While there are no official statistics, local officials and businessmen estimate that nearly half of the products, perhaps more, are imported.

Giacaman keeps just a few imported products in his store, most of them hidden in a small box beneath a counter. He takes them out to show customers and compare them to Palestinian-made ones.

"This is a plastic Jesus baby made in China and this is a ceramic one made in Bethlehem, and these are the olive wood rosaries that I make and the Chinese ones," he said, proudly showing what he said was the superior craftsmanship of the locally made goods.

Bethlehem is in the West Bank, occupied territory the Palestinians hope will be part of their future state. Tourism remains strong, but the rest of the economy has long languished, in part because of Israeli restrictions. Tourists must pass through a checkpoint in Israel's separation barrier to reach the town.

The "Visit Palestine Center," located in a 200-year-old house along a stone stairway just a few hundred meters (yards) from The Church of the Nativity, promotes a "Made in Palestine" label.

"There's a big influx of imported products and a lot of traditional crafts are declining gradually," said Samy Khoury, the center's founder and general manager.

The Visit Palestine Center, which started as an online store and travel guide five years ago, works with nearly 100 workshops and home-based artisans throughout the Palestinian territories and in Palestinian refugee camps in Jordan.

It features Palestinian traditional crafts, including Christmas-related ones like olive wood rosaries and mother of pearl ornaments. The center targets independent travelers and takes a fair trade approach to its business.

Trying to sell only Palestinian-made products comes with challenges.

"Maintaining consistency and quality, the right lead time, figuring how much production capacity the producers can give," are some of them, explained Khoury.

Then there's the issue of price.

Maher Canawati, owner of the Three Arches souvenir shop, sells locally made gifts and even has a wood workshop in the back. But he keeps room for imports as well.

"We have to carry all kinds of merchandise in our shop because we have different markets and different pilgrims with different budgets," said Canawati, whose family has provided services to pilgrims since the 16th century.

Canawati said he wants to give his customers options, and he is clear about the differences.

While craft workshop owners grumble about foreign imports, not everyone believes the imports have seriously threatened local merchants and artisans.

"It's a business," said Samir Hazboun, Chairman of the Bethlehem Chamber of Commerce. "I'm not aware of anyone running out of business because of the imports."

Ali Abu Srour, director general of the Palestinian Tourism Ministry, said the government is trying to update its tourism laws to protect local producers and merchants.

Under the proposed regulations, shopkeepers would be required to carry 70 percent locally made products, with clear labels that distinguish between imports and "Made in Palestine" ones.

Muhammad Yusuf, a wood craftsman with The Olive Wood Factory, scoffs at the imports.

"It's not good, this is better," he said with a smile as he worked on a figure of the Virgin Mary.

Back at the Blessings Gift Shop, Julie Deler, 24, a tourist from Germany, bought a small olive wood camel made by a Palestinian craftsman.

"I prefer locally made because I want to support the locals," she said.

Tariffs Could Cause Bible Shortage