The billionaire investor has famously avoided the volatile sector in the past.

The billionaire investor has famously avoided the volatile sector in the past, although his Berkshire Hathaway does own NetJets, which sells partial ownership interests in business jets.

The regulatory filing lists his investments as of September 30.

In separate statements, Atlanta-based Delta and Fort Worth, Texas-based American both said they welcome the investment.

The investments were announced the same day Moody's Investors Service lowered its outlook for the global airline industry to "stable" from "positive." Moody's said the airline sector's operating margins and operating profits are expected to decline in the next 12 to 18 months as capacity continues to outstrip demand.

Berkshire Hathaway Inc., based in Omaha, Nebraska, already owns more than 90 subsidiaries, including clothing, furniture and jewelry firms. It also has major investments in such companies as Coca-Cola Co. and Wells Fargo & Co.

Shares of the three carriers rose at least two percent in after-hours trading. 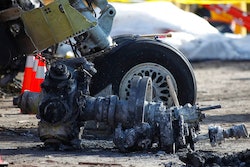