The proof of concept solves one of the biggest problems with solar power, storage.

A researcher from the University of Central Florida has developed filaments that can harvest and store solar power, and can be woven into textiles. How did he come up with the idea? Marty McFly and his self-lacing shoes in Back to the Future Part II.

Associate Professor Jayan Thomas is a nanotechnology scientist at the University of Central Florida's NanoScience Technology Center. His breakthrough could turn our clothing into wearable, solar-powered batteries that never need to be plugged in.

Thomas and his team of researchers developed copper ribbons that are thin, flexible and lightweight. The ribbons have a solar cell on one side and energy-storing layers on the other. The storage is the big deal, because the biggest problem with solar power is that the energy has to flow into the grid or be stored in a battery.

They created a proof-of-concept that shows that these filaments can be woven into clothing to harvest and store energy to power everything from phones to personal health sensors and wearables.

According to Thomas, the solar cell interfaces directly with a storage device through a shared electrode. The charges that are generated are directly stored on the same electrode.

"Depending on your application, you may not need a separate storage device," Thomas said to IEN. "If you already have a battery, that battery can be re-charged from the storage device of our integrated device." The professor also noted that the concept wouldn't have any issues with excessive head.

The device can currently store energy for one-to-two days, however Thomas believes the storage time can be extended by optimizing it.

This could have a particularly large impact on military technology, as some soldiers carry up to 30 pounds of batteries on their bodies. According to Thomas, it’s also hard for the military to deliver batteries to these soldiers in this hostile environment and a garment using this tech could harvest and store energy as long as the sun is shining.

All because a Marty's futuristic Nikes featured power laces. 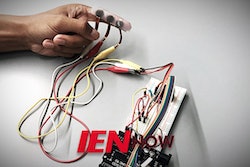 ‘Performance’ Shoe is for Gaming