U.S. Trade Deficit in September at Lowest Level in 19 Months

A falling trade deficit boosted the overall economy in the July-September quarter. Economists are looking for further gains in the coming months. 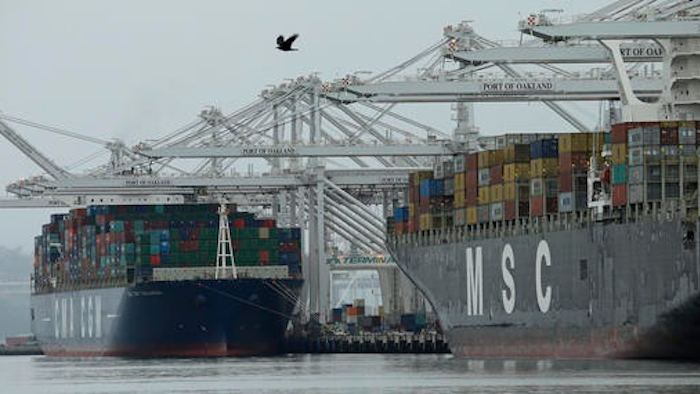 WASHINGTON (AP) — The U.S. trade deficit fell in September to the lowest level in 19 months as demand for U.S.-made airplanes and other exports increased while imports slipped. The politically sensitive deficit with China declined.

The deficit narrowed to $36.4 billion in September, down 9.9 percent from August, the Commerce Department said Friday. It was the lowest imbalance since February 2015. Exports rose 0.6 percent to $189.2 billion, the highest level in more than a year. Imports fell 1.3 percent to $226.6 billion.

The latest report offers American manufacturers an encouraging sign that the problems caused by overseas weakness and a rising dollar were beginning to wane. A falling trade deficit boosted the overall economy in the July-September quarter. Economists are looking for further gains in the coming months.

Trade has been a contentious issue in the current presidential election campaign. Republican Donald Trump has accused China, Mexico and other nations of pursuing unfair practices that have lowered U.S. wages and cost millions of American jobs. He has vowed to impose stiff penalty tariffs against countries that do not halt these practices.

Both Trump and Democrat Hillary Clinton have come out against the 12-nation Trans Pacific Partnership, a big regional trade deal which was negotiated by the Obama administration and is currently pending before Congress.

The deficit with China contracted to $32.5 billion in September and is running 6.3 percent below last year's level, although it remains America's single-biggest deficit.

The deficit with the European Union 26.8 percent to $10.2 billion, while the imbalance with Mexico edged down 0.6 percent to $5.2 billion.

A narrowing trade deficit boosted overall economic growth by 0.8 percentage point in the July-September quarter, helping to lift overall growth to a rate of 2.9 percent, double the 1.4 percent pace of the second quarter.

Analysts are hoping that the deficit will continue to shrink, boosted by rising export sales now that the dollar has stabilized after a period of sizable gains. A stronger dollar makes U.S. goods more expensive on foreign markets while making imports cheaper in the United States.

The trade deficit is the difference between what America exports for sale abroad and imports for consumption in the United States.

Trump has said he would exit from the North American Free Trade Agreement with Canada and Mexico if it is not improved and will kill the pending TPP agreement.

The shipping industry is estimated to account for nearly 3% of the greenhouse gas emissions driving global warming.
Sep 7th, 2021
Follow Us
Most Recent