Orders for durable goods edged down after gains in August and July. Orders in the category that serve as a proxy for business investment also plunged. 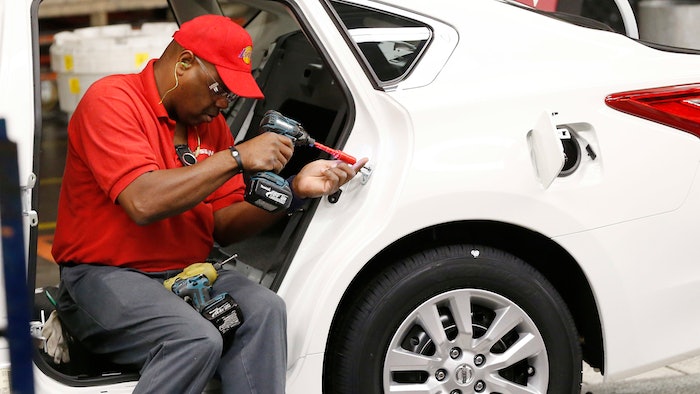 In this April 6, 2016, photograph, a technician works on a door assembly for a Nissan Altima on the assembly line at the Nissan Canton Vehicle Assembly Plant in Canton, Miss. Orders for big-ticket manufactured goods dipped slightly in September as a key category that tracks business investment fell by the largest amount in seven months, the Commerce Department said Thursday, Oct. 27, 2016.
AP Photo/Rogelio V. Solis

U.S. manufacturing has struggled this year as American companies have been confronted by a strong dollar which makes U.S. exports more expensive in foreign markets and by the lingering effects from a big drop in oil prices which triggered big investment cutbacks at energy companies.

Economists are hoping that better days are ahead for American manufacturers as the impacts of the stronger dollar and plunge in oil prices begin to fade.

Analysts said the big drop in orders in the investment category was disappointing but noted that this category had been posting a string of positive readings in recent months that indicate investment may finally be starting to recover after a prolonged period of weakness.

"The underlying trend is beginning to rise ... after the massive collapse in the previous two years, but we had hoped for a bit better in September," said Ian Shepherdson, chief economist at Pantheon Macroeconomics. He expects a return to positive readings for investment in October.

The government will release its first look at overall economic activity in the July-September period on Friday and analysts are forecasting that the gross domestic product will rebound to growth around 2.5 percent to 3 percent, a big improvement from anemic GDP readings of 0.8 percent in the first quarter and 1.4 percent in the April-June period.

For September, orders were weak in a number of areas. Demand for primary metals such as steel fell 0.3 percent while demand for computers dropped 8.6 percent.

Orders for civilian aircraft, a volatile category, jumped 12.5 percent but that increase followed a 24.2 percent plunge in August. Demand for military aircraft fell 44.8 percent in September.

Demand for machinery was up 1.2 percent while orders for appliances and other electrical equipment rose 1.5 percent.