The model is widely prized by taxi drivers in Mexico because of its low cost and ruggedness, but has also been slammed by critics for its lack of safety equipment and poor crash test results.

MEXICO CITY (AP) — Automaker Nissan's Mexico unit says it will cease production of the long-running Tsuru model that has been sold in the country since the mid-1980s.

The model is widely prized by taxi drivers in Mexico because of its low cost and ruggedness, but has also been slammed by critics for its lack of safety equipment and poor crash test results.

Nissan said Wednesday it will end production in May.

The boxy, basic car was sold under the Sentra name in the U.S. in the early 1990s, and was named the Sunny elsewhere.

It's been viewed as the last in the line of small, boxy cars that began production in the 1960s under the Datsun badge.

The car was a successor to the now-retired VW Bug as Mexico's favorite low-cost car. 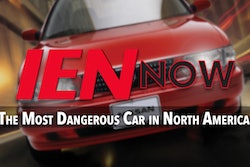 Most Dangerous Car in N. America