The violators were ordered to pay $1.5 million after a jury found that a cargo ship deliberately pumped oil-polluted water into the ocean, then repeatedly lied and falsified records. 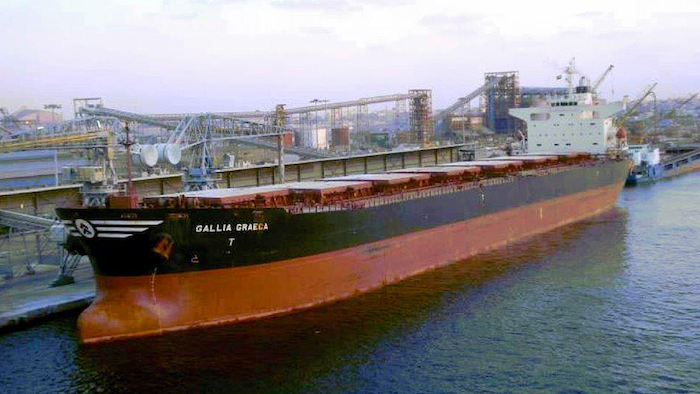 This undated U.S. Coast Guard photo, introduced as evidence in the trial against its owners in a pollution case, shows the cargo ship Gallia Graeca in Seattle. U.S. Coast Guard Petty Officer Daniel Hamilton, not shown, said he found "red flags" when he inspected the ship as it arrived in Seattle in October 2015.
U.S. Coast Guard via AP

SEATTLE (AP) — A federal judge in Seattle on Friday ordered two companies owned by a Greek shipping magnate to pay $1.5 million after a jury found that a cargo ship deliberately pumped oil-polluted water into the ocean, then repeatedly lied and falsified records in an effort to deceive inspectors with the U.S. Coast Guard.

Authorities hailed the sentence Friday as a rare success in holding corporate defendants accountable for pollution on the high seas, an offense they describe as notoriously difficult to detect and prove.

U.S. District Judge John Coughenour said he was troubled by the actions of Gallia Graeca LTD and Angelakos (Hellas) SA, which are part of a family of companies ultimately owned by Greek shipping magnate Evangelos Angelakos, and wanted to send a message "that will resonate with other parties in this industry and cause them to pause when they think about creating a corporate culture that encourages deception."

The vessel, the Gallia Graeca, arrived at the Pier 86 grain terminal on Seattle's waterfront from China in October 2015 to pick up a $20 million shipment of soybeans. When Petty Officer Daniel Hamilton came aboard to conduct a general inspection, several things seemed off, he said Friday after the sentencing. Valves were misaligned, oil appeared where it shouldn't have, and a device called the oil-water separator did not appear to have been maintained.

"Every step I went further, another red flag would come up," he said.

Ultimately, prosecutors discovered that 5,000 gallons of oil-fouled bilge water had been dumped at sea, but that inspectors were presented with an official log book showing no such discharges. Furthermore, when engineers demonstrated the operation of the oil-water separator for the Coast Guard, they did so in a manner designed to trick the inspectors into believing it was working.

In recommending a total fine of just $100,000, George Chalos, a New York attorney for the companies, argued that the misconduct was committed by rogue employees without the knowledge or approval of management, and that the companies stood to gain nothing by falsifying the records. The companies had no prior criminal history and are committed to protecting the environment, he said.

But the U.S. Attorney's Office, which recommended a $3 million fine, said shipping company executives had been in touch with the vessel's engineers about how they should present the log book to the Coast Guard. The companies' motives were to try to avoid being detained in Seattle for environmental noncompliance so the valuable soybean shipment could depart on schedule, assistant U.S. attorneys Seth Wilkinson and Matt Diggs argued.

Prosecutors also suggested — and the judge concurred — that a corporate official lied on the witness stand when he claimed to have personally performed the lowly task of cleaning the oil-water separator just before the vessel sailed.

In June, the jury convicted the companies, along with the vessel's chief and second engineers, of charges related to pollution, falsification of records and fraud. The engineers each received 10 days in jail.

Prosecutors noted that deliberate dumping of oil at sea is a leading killer of seabirds.

The Coast Guard annually refers about a dozen cases of high-seas pollution to the Justice Department, but it's relatively rare for prosecutors to be able to document the discharges or cover-ups in a way that enables them to hold corporations — in addition to individuals — criminally liable.

In the Northwest, about one in every five foreign-flagged ship that docks in port is inspected by the Coast Guard. Of 2,200 inspections in the last five years, the Gallia Graeca is just the second that resulted in criminal prosecution, Capt. Brian Gilda, the agency's top environmental officer in the Northwest, told the judge.

"Most often we find that ships are substantially complying with international regulations," Gilda said. "But we still, due to cases like this, continue to suspect that a minority of all shipping companies ... are putting financial considerations above environmental compliance and stewardship."

The judge ordered the companies to direct $200,000 of the penalty to the National Parks Foundation and the National Fish and Wildlife Foundation; put them on probation for five years; and said they must adopt environmental compliance plans.

The companies' lawyer requested a five-year payment plan for the fine, citing tough times in the shipping industry. The judge wasn't moved. "No," he said curtly. "It's due."