The next administration, however, may change that equation for Airbus and Boeing, whose possible deal with Iran would be the biggest for an American company since the 1979 Islamic Revolution and U.S. Embassy takeover. 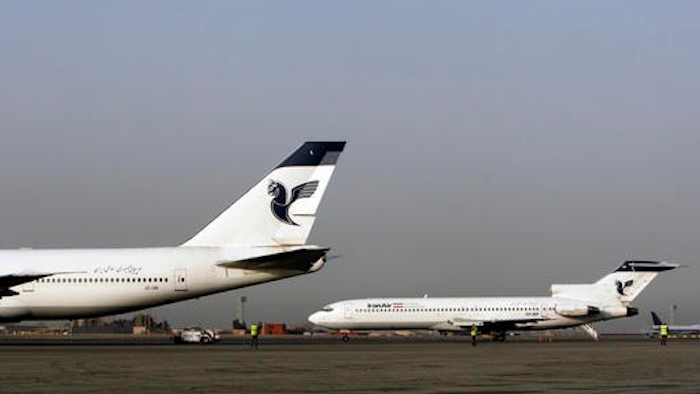 In this March 2, 2008 file photo, two passenger planes of Iran's national air carrier, Iran Air, are parked at the Mehrabad Airport in Tehran, Iran. Airbus announced Wednesday, Sept. 21, 2016, that the U.S. government has granted it a license allowing it to sell the first 17 planes involved in a landmark deal with Iran. Most Iranian planes were purchased before the 1979 Islamic Revolution that ousted Shah Mohammad Reza Pahlavi and brought Islamists to power.
AP Photo/Vahid Salemi, File

The announcements Wednesday came as Iranian and U.S. leaders are in New York for the United Nations General Assembly and show that the outgoing administration of President Barack Obama is honoring the economic terms of the nuclear pact.

The next administration, however, may change that equation for Airbus and Boeing, whose possible deal with Iran would be the biggest for an American company since the 1979 Islamic Revolution and U.S. Embassy takeover.

European airplane manufacturer Airbus announced the license from the U.S. Treasury's Office of Foreign Assets Control early Wednesday. Boeing followed with its own announcement later in the day.

Though based abroad, Airbus needed the approval of the U.S. Treasury for the deal because at least 10 percent of the manufacturer's components are of American origin.

Airbus applied for two licenses to cover its deal with Iran to ensure the fast delivery of some of the aircraft, Airbus spokesman Justin Dubon told The Associated Press. The license announced Wednesday covers the first 17 planes involved in the deal, which will be A320s and A330s, he said.

Dubon said Airbus hoped to receive a second license allowing it to sell the remaining planes to Iran soon.

In January, national carrier Iran Air signed agreements to buy 118 planes from Airbus, estimated to be worth some 22.8 billion euros ($25 billion). On Sunday, state TV reported that Asghar Fakhrieh Kashan, a deputy transportation minister, said Iran would cut the number of Airbus planes to 112.

Base model A320s are listed at an average of $98 million, while A330s start at $231.5 million. That puts the value of the approved 17 aircraft in the first license around at least $1.8 billion and possibly much higher based on list prices, though buyers typically negotiate sizable discounts for bulk orders.

Under Boeing's deal, Iran Air will buy 80 aircraft with a total list price of $17.6 billion, with deliveries beginning in 2017 and running until 2025. Iran Air also will lease 29 new Boeing 737s in a deal that Iranian officials have suggested would be worth some $25 billion in total.

In a statement, Boeing spokesman Marc Sklar said, "We have received that license and remain in talks with Iran Air" based on the memorandum of agreement reached in June.

"These licenses contain strict conditions to ensure that the planes will be used exclusively for commercial passenger use and cannot be resold or transferred to a designated entity," Selak said in a statement.

Iran's U.N. mission did not respond to a request for comment Wednesday. State television referred to an AP report on the licenses.

Iran's nuclear deal with world powers, which limits its enrichment of uranium in exchange for the lifting of some international sanctions, specifically allowed for the purchase of aircraft and parts.

The license approval clears the way for the two plane manufacturers to begin accessing one of the last untapped aviation markets in the world, home to 80 million people. However, Western analysts are skeptical that there is demand for so many jets or available financing for two separate $25 billion deals.

Most Iranian planes were purchased before the Islamic Revolution that ousted Shah Mohammad Reza Pahlavi and brought Islamists to power. Out of Iran's 250 commercial planes, 162 were flying in June, while the rest were grounded due to lack of spare parts.

Iran Air, whose website lists 43 airplanes in its fleet, says it has direct flights to over 30 international destinations, including London.

The aircraft deal also has become a political issue in an election year in the U.S. Some American lawmakers have criticized the Boeing deal to Iran over the Islamic Republic's "pernicious behavior," including launching ballistic missiles, firing rockets near U.S. warships in the strategic Strait of Hormuz and briefly detaining American sailors who strayed into its territorial waters.

The U.S. presidential election could also have an effect on the sales. Republican presidential candidate Donald Trump has threatened to tear up the nuclear deal if elected this November.