According to the NRDC, Samsung, LG, and Vizio, which represent half of the U.S. market, are exploiting flaws in the government's testing that could cost owners an extra $1.2 billion in utility bills, and more than 5 million metric tons of pollution - and that's if only one-third of TV owners changed their setting.

Samsung (already having a tough week because Note 7 phones may be exploding), LG, and Vizio are designing TVs to get a good score on the DOE energy-use tests that also have software that disables key energy-saving features, with little to no on-screen warning. All you have to do is change the main picture setting, and that alone can boost energy use by 50-100%.

The NRDC also found that viewing HDR content could increase energy use by 30-50%.

The implications could mean that it costs twice as much operate a television, adding $100 to $200 in operating costs over each television's 10-year lifetime.

Too much Facebook can be harmful, it's bad on the eyes, can hurt your career if you don't watch what you say or who can at least see it, and it can even cause anxiety, depression, and general loneliness.

However, yesterday the Associated Press reported Facebook CEO Mark Zuckerberg's effort to battle disease. No, not one in particular, all disease. And he and his wife, Priscilla Chan who is a pediatrician, put up $3 billion over the next 10 years to accelerate research.

The hope is to have all disease curable, preventable, or manageable within the next 80 years.

The plan is ambitious, and through the couple's philanthropic organization, the Chan Zuckerberg Initiative, $600 million of the funds will go to the creation of a new San Francisco-based research center that will be home to engineers who will work alongside medical and scientific researchers not on specific diseases, according to the report, but basic research like a cell atlas of sorts that maps out every cell in the body.

Ten days ago, we found out that Apple was rethinking the whole idea of becoming an automaker and shifting its focus onto self-driving technology.

Some reports indicated that the company suffered from management turnover and technical delays, others suggested that Apple overestimated the power of its engineering prowess and underestimated the difficulty in starting a car startup from scratch. I mean, just consider the Tesla hiccups, and the fact that Fisker, Coda, and Aptera are now answers to some intensely competitive automotive industry trivia.

This week, the Financial Times reported that Apple h as now approached McLaren Technology regarding a potential takeover or strategic investment. Both companies, as expected, are denying everything.

While Apple's efforts to enter the automotive manufacturing industry have had problems in the past, it's interesting to consider what they could accomplish either as an owner or strategic partner to the British supercar manufacturer that is valued up to $1.9 billion.

I feel like the partnership would have the potential to either yield one of the coolest supercars we've ever seen, or a fantastic financial cluster fire after years of engineering departments butting heads. Remember Google bought Boston Dynamics? Let's not let history repeat itself. Or, sorry, it's not confirmed yet. Probable history.

This is Engineering By Design with David Mantey 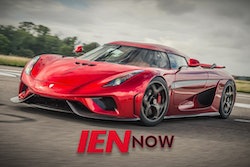