The declines in both exports and imports were worse than many forecasters expected.

BEIJING (AP) — China's exports fell again in July by an unexpectedly wide margin while a decline in imports accelerated in a possible sign of weakness in the world's second-largest economy.

Weak global demand has hampered efforts to shore up Chinese trade and stave off job losses in export industries. The contraction in imports reflects possible weakness in the domestic economy, but the figures also are depressed by a decline in prices of oil and other commodities.

Chinese economic growth held steady at 6.7 percent in the quarter ending in June compared with a year earlier, though that was the lowest quarterly level since the aftermath of the 2008 global crisis.

The declines in both exports and imports were worse than many forecasters expected.

"The data dash hopes that a pick-up in global manufacturing growth last month might have buoyed shipments from China," said Julian Evans-Pritchard of Capital Economics in a report.

The slump in imports meant China's global trade surplus swelled by 22 percent from the same month a year ago to $52.3 billion.

Even taking lower prices into account, the Chinese figures suggest imports fell by 5.3 percent, according to Louis Kuijs of Oxford Economics.

"It implies that volumes dropped substantially month on month," said Kuijs in a report. "It may herald that domestic demand started to slow down in July." 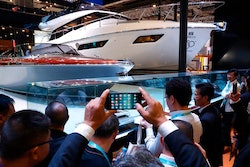